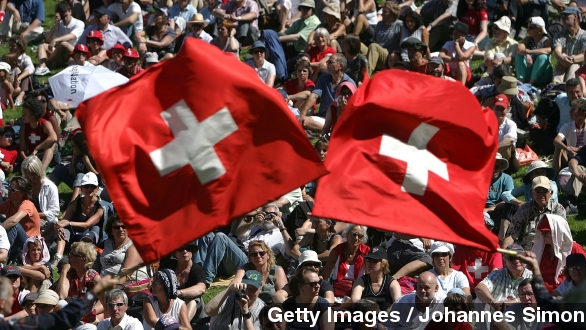 People in Switzerland headed to the polls Sunday, as the country voted in a referendum on whether to drastically cut immigration.

The Swiss 'Ecopop' proposal looked to limit the amount of immigration into Switzerland to two percent of the country's population. (Video via TeleZuri)

'Ecopop' supporters say it's an environmental issue, contesting that the country's population is growing too quickly, and threatening Swiss nature and countryside. (Video via Ecopop)

Close to a fourth of the Swiss population is made up of immigrants, and the proposed measure would cut immigration from approximately 80,000 people a year, to just around 16,000.

And that method — of cutting back on immigration — is one that has seen increasing popularity across Europe.

In May, anti-immigration parties won big in the European parliament elections, reflecting the anti-immigrant sentiment that's been on the rise across the continent over the last few years. (Video via France 24)

Back in 2012 a writer for GlobalVoicesOnline argued the backlash against immigrants was driven by the European economic downturn writing, "singling out immigration as the root of the global economic crisis has proven fruitful for far-right parties across the continent."

Back in February, Switzerland voted in another referendum to implement immigration quotas, and analysts then explained the main motivation was likely nationalistic. (Video via Jewish News One)

Georgetown University's Charles Kupchan explained on PBS, "The people who voted against immigration come from Cantons with few immigrants ... This is much more of a visceral reaction to what's happening to Swiss nationhood, who are these people, more than it is an economic issue."

Switzerland's main political parties were opposed to Sunday's referendum, mainly because they argue capping immigration would hurt the Swiss economy. (Video via BBC)

The Swiss ultimately voted down the immigration cap by a comfortable margin.