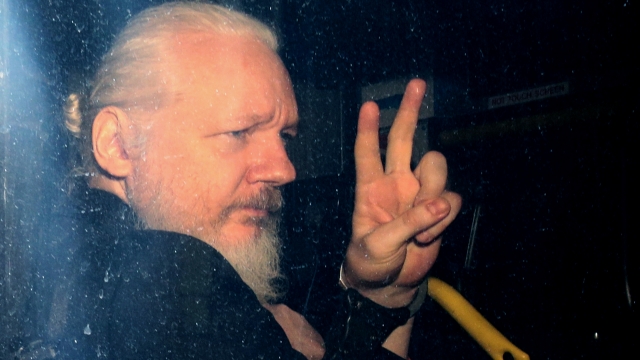 Sweden's Deputy Director of Public Prosecution Eva-Marie Persson said Monday that she requested "the District Court to detain Assange ... on probable cause suspected for rape." If the court decides to detain Assange, Persson said she would issue a European arrest warrant to have Assange surrendered to Sweden.

Assange had been living at the Ecuadorian Embassy in London since 2012. He was avoiding extradition to Sweden for the sexual assault allegation. The case was later dropped, but one of the accusers asked that the probe be opened again.

In April, Ecuador revoked Assange's asylum, and British authorities detained him on a U.S. extradition warrant and a U.K. warrant for failing to surrender to the court in 2012. The U.K. found Assange guilty of breaking bail conditions and sentenced him to 50 weeks in prison.

Assange's lawyer said he violated bail because he was afraid if he were extradited to Sweden, he'd also be extradited to the U.S. and potentially sent to Guantanamo Bay. Assange told the court he did what he thought was best at the time. The U.S. has charged Assange with conspiracy to commit computer hacking. He could face up to five years in prison if convicted on those charges.

Back in Sweden, prosecutors said Assange has to serve 25 weeks of his sentence in the U.K. before he can be released. If Sweden's European Arrest Warrant and the U.S.'s request for extradition conflict, the U.K. will "decide on the order of priority."

Persson said while the outcome of the process is "impossible to predict," she thinks the Swedish case against Assange can "proceed concurrently with the proceedings in the U.K."