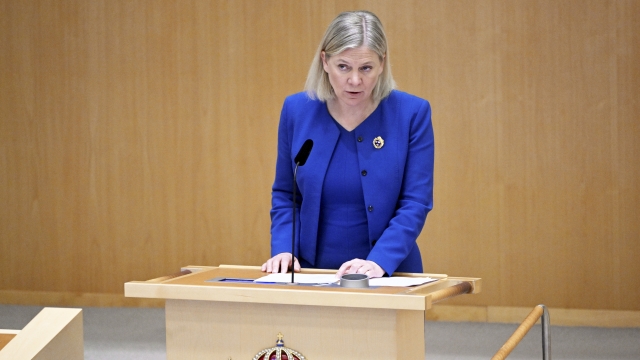 SMS
Sweden Ends Neutrality, Joins Finland In Seeking NATO Berth
By Associated Press
By Associated Press
May 16, 2022
Public opinion in both countries was firmly against joining NATO before Russia invaded Ukraine, but support for NATO membership surged shortly after.

Sweden's prime minister announced Monday that Sweden will join Finland in seeking NATO membership in the wake of Russia's invasion of Ukraine.

The historic shift, which comes after more than 200 years of military nonalignment in the Nordic country, is likely to upset Russian President Vladimir Putin.

"We will inform NATO that we want to become a member of the alliance," Prime Minister Magdalena Andersson said.

The announcement came after a debate in Riksdagen, or Parliament, earlier Monday showed that there is a huge support for joining NATO. Out of Sweden's eight parties, only two smaller left-leaning parties opposed it.

On Sunday, the Swedish Social Democrats broke with the party's long-standing position that Sweden must remain nonaligned, paving the way for a clear majority for NATO membership in the parliament.

The move in Sweden came after neighboring Finland announced Sunday that it too would seek to join the 30-country alliance.

Public opinion in both countries was firmly against joining NATO before the Russian invasion of Ukraine on Feb. 24, but support for NATO membership surged quickly after that.

Andersson called it "a historic change in our country's security policy" as she addressed lawmakers in the Swedish capital.

"Sweden needs formal security guarantees that come with membership in NATO," she said.

The move was essentially a done deal after Andersson's Social Democratic Party on Sunday dropped its long-held opposition to NATO membership, giving those in favor a clear majority in Parliament.

"The Swedish government's intent is to apply for NATO membership. A historic day for Sweden," Foreign Minister Ann Linde wrote on Twitter. "With a broad support from political parties in the parliament, the conclusion is that Sweden will stand stronger together with allies in NATO."

Once a regional military power, Sweden has avoided military alliances since the end of the Napoleonic Wars. Like Finland it remained neutral throughout the Cold War, but formed closer relations with NATO after the Soviet collapse.

Public opinion in both countries was firmly against joining NATO until Russia's Feb. 24 invasion of Ukraine, after which polls indicated a dramatic shift in favor of membership.

The governments in Finland and Sweden responded by swiftly initiating discussions across political parties about NATO membership and reaching out the U.S., Britain, Germany and other NATO countries for their support.

In Helsinki, Senate Republican leader Mitch McConnell said Monday that there is "very significant" support in the Congress and that he expects swift ratification. He said he hoped a vote could be held before the August recess.

The Kremlin has repeatedly warned the move would have destabilizing consequences for security in Europe.

Russian President Vladimir Putin said Monday that Moscow "does not have a problem" with Sweden or Finland as they apply for NATO membership, but that "the expansion of military infrastructure onto this territory will of course give rise to our reaction in response."

In the Swedish Parliament, only the small Left and Green parties objected to seeking NATO membership.

Andersson said Sweden would refuse nuclear weapons or permanent NATO bases on its soil — similar conditions as neighboring Norway and Denmark insisted on when the alliance was formed after World War II.

Though NATO officials have expressed hopes for a quick ratification process, all 30 current NATO members must agree to let Finland and Sweden in the door. Turkey voiced some objections last week, accusing the two countries of supporting Kurdish militants and others whom Turkey considers to be terrorists.

Swedish Defense Minister Peter Hultqvist told public broadcaster SVT that a Swedish delegation would be sent to Ankara to discuss the issue.