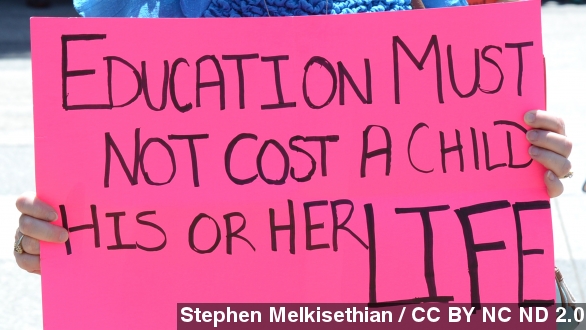 A suspected Boko Haram suicide bomber set off a deadly blast in the middle of a Nigerian school killing dozens of children Monday morning.

JAYNE SECKER, SKY NEWS: "It was detonated during the school's morning assembly in the town of Potiskum in the country's northeast."

Potiskum is the commercial hub of Yobe in northeastern Nigeria, one of three states under a state of emergency because of Boko Haram. (Video via Google Earth)

While the city is in a more remote part of the country and confirmed information is difficult to obtain so early, Nigeria's The Daily Sun put the death toll at 48 people.

Boko Haram, of course, is best known for the April kidnapping of nearly 300 girls from a school in Chibok. More than 200 of those girls haven't come home with the group claiming to have 'married off' many of them. (Video via CBS)

However, the terrorist group has plagued Nigeria and killed thousands since 2009, often targeting schools. (Video via The New York Times)

A massacre at another school in Yobe state earlier this year targeting and killing 29 teenage boys has largely been overshadowed by the Chibok kidnappings. (Video via BBC)

Boko Haram is well-entrenched in the northeast of Nigeria, and both the country's military and president have received intense criticism for their inability to deal with the group. Unlike other terrorist groups, Boko Haram aims only to cause chaos in its own country and overthrow the Nigerian government.

This is the second bombing in Potiskum in a week, and as BBC's Nigeria correspondent wrote, "The insecurity in the north-east is so rampant, with entire towns and villages now in the jihadists' hands, it will be extremely hard for other bombings to be prevented."

In this latest bombing, Channels TV reports a source says the bomber disguised him or herself as a student to get into the school.