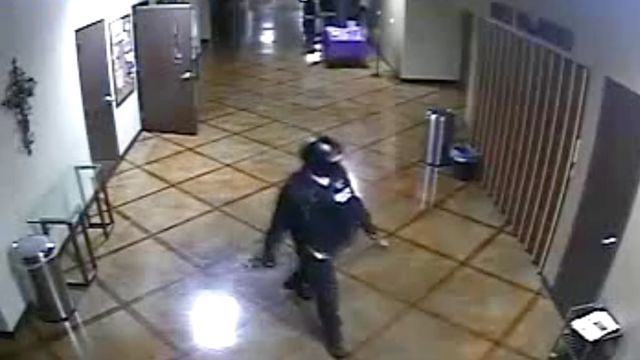 Police say the person in this video dressed in full SWAT gear is wanted for questioning in connection to the killing of a 45-year-old fitness instructor.

Terri "Missy" Bevers was found dead inside Creekside Church of Christ in Midlothian, Texas — located about 25 miles southwest of Dallas.

Police say Bevers was first seen at the church at 4:20 a.m. local time, getting ready to teach her 5 a.m. fitness class. The suspect in the SWAT gear was first picked up by motion-activated cameras at 3:50 a.m.

"I'm so sad about it. She was doing something she loved. She did it to help people. It was a business, but it was more than a business to her. It was a passion," Kelli Herron, a friend of Bevers, said.

Police are still unsure of a motive for the killing. They say it's possible she interrupted a burglary, as the suspect forced entry into the building, but they aren't ruling out the possibility that she was targeted after they discovered she had posted her class schedule on Facebook.

KDFW spoke with Bevers' husband, who said he was out of town when he first started receiving concerning phone calls from students in her class.

A $10,000 reward is now being offered for information on the suspect.