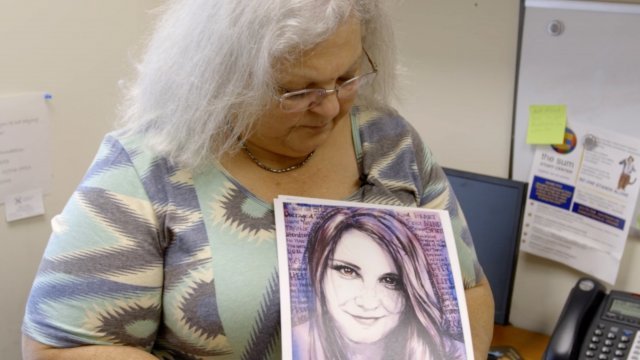 As the chaos of the Unite the Right rally unfolded in Charlottesville, Virginia, last year, counter-protesters took to the streets. Among that crowd was Heather Heyer. Heyer was killed as a car barreled down what is now known as Heather Heyer Way in downtown Charlottesville. Susan Bro lost her daughter that day.

"I'm not the first person to ever lose a child to violence," Bro said. "And I'm certainly not going to be the last, unfortunately. And so I knew it was survivable. I was one of those white people who for many years thought that everything was solved back in 1965. Well, it wasn't."

NEWSY'S JAMAL ANDRESS: Has your life taken up a new purpose since last year?SUSAN BRO: Oh, absolutely. I was a government secretary working for state government, state and county government, and just basically a grandmother of eight looking forward to retirement. I had political opinions, but nobody cared to hear them, and as a government employee, I didn't share them. Not only have I become more outspoken because I can, but also, people actually ask. I'd still trade it all for Heather back. But yeah, life has definitely changed.

Bro left the shadows of private life for good when she delivered a powerful and eloquent speech at her daughter's funeral last year.

ANDRESS: One of the things that really stuck out to me was how strong you were at the funeral proceedings last year. How did you sort of push through for that moment?BRO: I knew I had one chance to introduce my daughter to the public, and she had become a public figure through no fault of her own. It was very important to me to set the proper tone, though. Not, "Let's go out and kill a bunch of people." Not, "Let's all forgive and love everybody." Neither one of those rang true to me. Finding that middle path of acknowledging: Yes, I'm very angry that you took away my child; but also, let's see what we can do good beyond this.

That goodwill has manifested into the Heather Heyer Foundation. After raising a quarter of a million dollars for Heyer's funeral in less than 24 hours through a GoFundMe page, Bro decided she needed to do more.

BRO: Lots of rage and anger in the beginning. But I pushed myself really hard to deal with the foundation, getting it rolling. Practical matters like let's develop the letterhead, let's develop the receipt system. I still don't have the newsletter system quite worked out yet. But I was really absorbed in that. And that kind of got me through.

Alfred Wilson co-founded the Heather Heyer Foundation with Bro. He hired Heyer six years ago as a paralegal at Miller Law Group in Charlottesville.

WILSON: When this incident took place, to my understanding, I'm one of the first people that Susan called. My wife, my daughter — we didn't think twice. We hopped in the car, we got straight to the hospital. And we were all-in at that point.

WILSON: A lot of times people will ask me, "What made you want to hire Heather to come work there, what made you want to take that chance?" Because as Heather pointed out to me, she reminded me, "Alfred, I've never worked in the office. I'm not all that computer savvy." But she knew people. Having her here, to me, was truly like having a breath of fresh air.

The foundation, much like Heyer, wants to promote social activism, and it's starting with students.

BRO: I think I would sum up everything that we're doing in the idea that we're trying to educate and empower the next generation of social justice advocates and warriors. People say, "Well, my family never owned slaves." I often said that. That's not the point anymore. White privilege affects all of us. The schools, we grew up in the neighborhoods we get, the housing loans we could get, the business loans we could get.

The foundation's first round of scholarships went to three students who sent in essays this past March. Bro and Wilson say they want to award another scholarship to a nontraditional graduate student — someone like Heyer who has a passion for social justice and may want to go back to school to pursue it.

WILSON: Everybody can make a difference. Heather wanted to educate not only me, but anyone that was around her.

WILSON: I don't see it as being a crusader for others. I see it as being a crusader for humankind. Anytime anybody is marginalized, we all are. Humanity cannot tolerate these things. I tell people, I got a really nasty, rotten bunch of lemons that I'm trying to make lemon bread, lemonade, lemon cake.ANDRESS: Running down the list?BRO: Yeah, anything I can squeeze out of those lemons. Because I refuse to let my daughter's death be in vain. I just simply refuse.