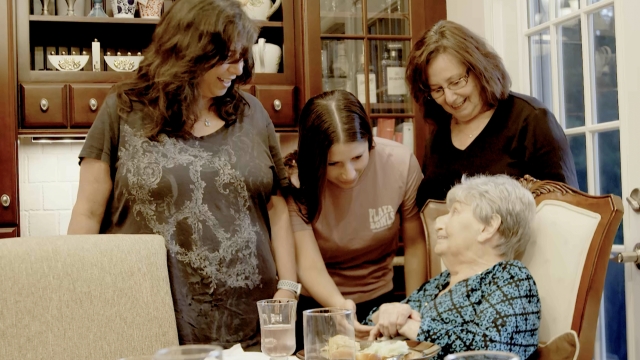 Sometimes history doesn't seem so far away, especially for those who lived it.

101-year-old Esther Koisner celebrates Shabbat every week with her children, her grandchildren and if they're around, her great grandchildren. But she's easily transported to a different home, one she lived in nearly nine decades ago in Colon, Germany — one Nazis once stormed into, looking to take away her brother.

"They ripped the child out of the mother's arms and smashed his head against the wall, killing the child instantly," said her son Ed.

"They called us dirty Jews when we went to school. We have to call 'Heil Hitler,' in the beginning and say 'good morning, Heil Hitler.' When we didn't hold our hands up, they gave us the stick," said Koisner.

To those closest to that kind of pain it's their history, too. Even if they didn't live it.

ESTHER KOISNER: My mother said, he is not here. They pushed her. I started crying. I was a little girl.

NEWSY'S ALEX MILLER: Did your husband talk about the Holocaust a lot when he was alive?

KOISNER: No. Why not? Well, he he lost his parents. And brothers and sister.

MILLER: Do you think it was too painful to talk about?

The initial reluctance to discuss that trauma bled to her children and grandchildren, including grandson Jay.

"I saw my uncle had a tattoo on his arm. And I said, what is that? And my dad was there. And he said, oh, that's the number of his girlfriend, because my uncle didn't want to say anything. And then everyone changed the subject," said Jay.

Survivor reactions to trauma are as varied as the millions of people who suffered. Some keep their memories tucked away in places no one could access. Some re-experience their trauma only in nightmares. Others tell their harrowing accounts to anyone who will listen. Vocal or not, the impacts ripple through generations.

Dr. Irit Felsen, a psychologist who specializes in Holocaust-related trauma, knows this subject on a deeper level — one that books could never teach. Both her parents were survivors of the Holocaust, making her a 2G, or 2nd-generation survivor.

"There is a history of 2,000 and more years of persecution and discrimination and death threat all the time over the heads of Jews and Jews' population, every Jewish population everywhere. That has an impact, generationally has an impact. It has a profound impact on how one experiences life." said Felsen. "Children of trauma survivors have an experiential knowledge of their parents' trauma, of experiences that they never actually lived through."

She says passing on generational trauma is not just the retelling of Holocaust stories. Many times it's through experiences in daily life through their parents' personalities.

"Being hyper vigilant about all kinds of things all the time, a little suspicious… always scanning for danger for what can go wrong, anticipating the worst outcome, perhaps when some people wouldn't, mistrustful illness, anxiety, a tendency to sort of depressive experiences," said Felsen.

This trauma is depicted vividly in the movie "Fugitive Pieces."

In the years after the Holocaust, resources were scarce and mental health care just was not the focus. Many survivors who had witnessed the repeated murder of other Jews in their family, or endured years of torture and starvation, were told just to let it go. But the reality of the trauma was tangible even years later. As many survivors created their own families, they had little to no extended family of their own. No aunts and uncles, cousins or grandparents.

"I had not one grandparent. … My father was one of eight, my mother was originally one of seven. None of my mother's siblings survived. For the most part, the amazing thing is that the survivors did not become a population of psychiatric patients, they did not become a population of homeless people unable to function in society, they actually are a very successful population," said Felsen. 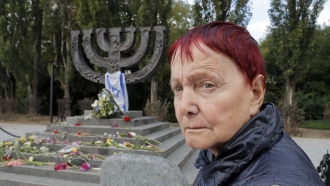 Decades later experts say these experiences are still impacting the very fabric of families. A 2015 study by Dr. Rachel Yehuda at Mount Sinai Hospital found genetic changes to Holocaust survivors' descendants, specifically focused around the gene associated with stress hormones. That means not only could survivors suffer from PTSD, but their descendants are more prone to it.

Dr. Felsen uses a photo when she speaks to groups of 2Gs. It's a photo taken of vines on a snowy day. But she says she typically hears an audible reaction from the crowd. They see Holocaust survivors standing at a morning roll call in the snow. Those not impacted by the Holocaust she says see just a snowy vineyard. She calls it the dual reality of trauma. For survivors and their children they live in the here and now, but also in the reality of trauma.

"The reaction will be very much from that trauma reality and sometimes completely not really appropriate to the stimulus in the here and now," said Felsen.

And so for Dr. Felsen, both personally and professionally, her goal is to make sure the next generation is not as traumatized as the last — so that maybe one day future descendants of survivors will just see snowy vines while remembering the horrors and the lessons of a genocide.