The Negative Impacts Of Americans Opting Out Of Lunch Breaks 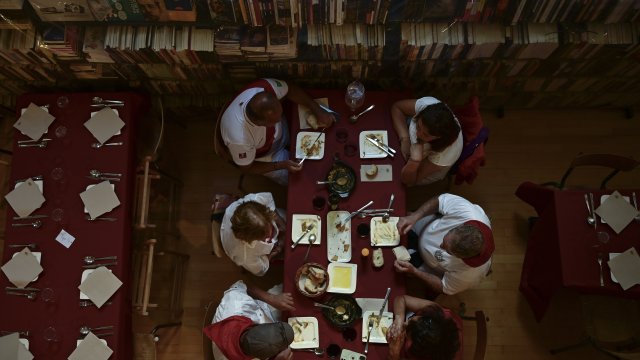 SMS
The Negative Impacts Of Americans Opting Out Of Lunch Breaks
By Ben Schamisso
By Ben Schamisso
July 8, 2022
Americans are notoriously overworked — taking fewer vacation days and shorter lunch breaks than workers in many other nations.

We all have deadlines and a thousand things to do.

So, how are we supposed to enjoy a good lunch break?

"I used to work through my lunch and somebody pointed out — someone who had worked at the place longer — said, 'Don't be an idiot,'" Desiree Burcum said.

"I've been teaching for 10 years and I'm finally like, 'This isn't normal. I want lunch,'" Sloan Doyle said.

According to one study, 62% of American workers prefer to eat at their desk, even though research shows that's unproductive.

Anita Woolley of Carnegie Mellon University says breaking off from a task allows our brain to rejuvenate.

"All of us have some sort of a cycle where, you know, we kind of ramp up, we're at our maximum productivity, our clearest thinking, but then there's sort of a tapering off," she said. "When you're working on a problem and literally changing context, thinking about something else can enhance ... their ability to connect to new ideas when they come back to the problem."

Surveys show people skip lunch in the U.S. because they feel guilty or obligated to keep working. But research shows that a lunch break is good for performance, stress levels and job satisfaction.

"When they don't take a break and they just kind of dig, dig, dig into a problem and don't solve it or spend a long time doing it, it can be really dissatisfying, and it can contribute to burnout," Woolley continued.

There are many ways to make the most of your lunch break. Woolley suggests spending time outdoors and socializing with colleagues.

But that's if you're allowed to take a break in the first place.

"The leaders themselves need to take a lunch break, right? And so they, you know, very prominently can put a block on their calendar and not schedule meetings, not accept meetings," Woolley said.

Americans are notoriously overworked — taking fewer vacation days and shorter lunch breaks than workers in many other nations.

In France, for example, eating at your desk is not just frowned upon, it's straight up illegal.

"At lunch you talk to people, you interact; it makes you a happier person," French food historian Martin Bruegel said.

A French law from over 100 years ago bans lunches at employees' desks.

Bruegel fought to reinstate the law after it was shortly suspended — and questioned — during the pandemic.

"Some people started to say this is just another sign of how overregulated France is," Bruegel said.

His side won and the law is once again on the books, even though it's not really enforced.