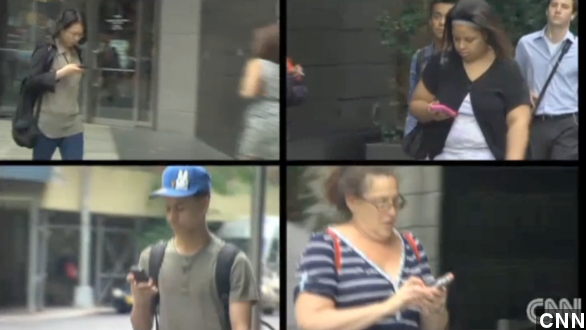 As seen here, a mall visitor seems distracted by her phone as she walks and falls into a fountain — and she's not alone. (Via CBS)

"Well, the gentleman over here almost got hit by a car because he was texting on his phone." (Via CNN)

In the first study of its kind, Australian researchers say walking while reading or texting on a cell phone is not only distracting, but it can actually damage your body's posture. (Via WFXT)

They used movie special-effects technology similar to the kind used in films such as "The Hobbit" to determine how texting affects a person's "gait performance." (Via Warner Bros. / "The Hobbit")

The researchers looked at the ways 26 young, seasoned texters walked under three different conditions: walking without their phones, while reading from their phones and while typing a sentence. (Via PLOS One)

The study found that the participants actually changed the way they walked when they texted — putting them off balance, swerving and moving in a "robotic" way that would make them more likely to fall when running into an obstacle.

The study also highlighted a correlation between the increase in mobile phone use and the number of phone-related accidents. (Via KOKH)

CBS reports texting while driving is already banned in many U.S. cities, and now some are considering bans on texting while walking, as well.

It's unclear why texting distorts the way someone walks, but the researchers say it might be due to multitasking overwhelming the brain.