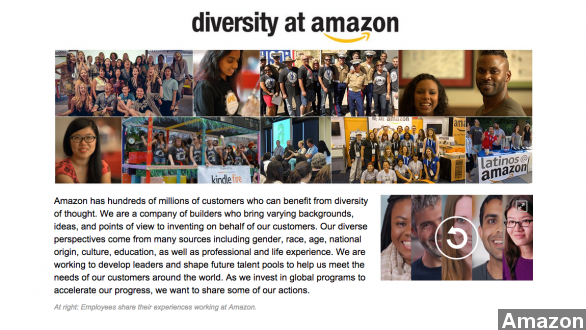 SMS
Surprise: Amazon Report Shows Lack Of Diversity
By Madison Burke
By Madison Burke
November 1, 2014
Amazon's report aligns with the rest of the tech industry in having a lack of diversity in the workplace.
SHOW TRANSCRIPT

Amazon is taking some heat after releasing its diversity figures, but the company's diversity — or lack thereof — didn't come as a big surprise.

This is pretty consistent with the rest of the tech field, so the results of Amazon's diversity report were expected.

Amazon had received pressure from critics in the past to make information on their demographics public. One of those critics, Rev. Jesse Jackson, told The Seattle Times, "Their marketplace is very American. But their workplace is not."

On its website, Amazon says diversity in tech is a clear problem, adding it often goes back to women and minorities steering away from technology and engineering in school.

And there are stats to back that up. The United States Census Bureau found a strong lack of women and minorities in the fields of science, technology, engineering and mathematics — often referred to as STEM.

Diversity coalition Rainbow Push slammed Amazon for both its white male majority and for being late to the game in releasing numbers on its demographics.

In a press release the coalition called the way Amazon presented its statistics "intentionally deceptive," since the company didn't list where black and hispanic workers are placed. It added, "the broad assumption is that a high percentage of their Black and Latino employees work in their warehouses."

Amazon says it has several groups  focused on giving employees insight about internal diversity. The company also says it's working with several organizations to get more women and minorities interested in STEM.