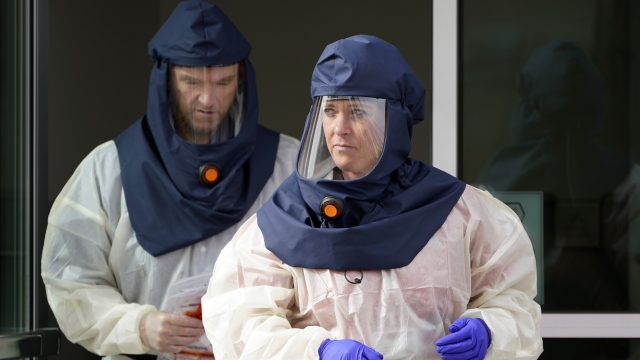 Health officials say many hospitals are in desperate need off additional staff.

"We've heard there are some hospitals that have no ICU beds available as of today," Dr. Ryan Westergaard, chief medical officer of the Wisconsin Department of Health Services, said.

As some hospitals in Chicago, St. Louis, Tulsa and Salt Lake City run out of ICU beds, health officials say they are in critical need of more staff.

Doctors and nurses who are putting their own health on the line as COVID cases surge.

"Right now our top priority and concern is our staff," says Cara Welch, director of communications for the Colorado Hospital Association.

As hospitals become overwhelmed, many are facing the grim reality of turning patients away.

"There may be instances where people who have needs for emergency medical care won't have a place to go in time. So, that's the real concern of an overwhelmed health care system," Westergaard said.

And with months until projected peaks, it's on track to get much worse before it gets any better.

"In contrast with the previous two surges we've seen with COVID, one in April and the one in the summer, this one is truly nationwide. It's every single part of the country," Dr. Mark McClellan, a former FDA commissioner, said.

"We have nine months worth of data. There's a lot that's unknown. And of course, the initial, and still the overwhelming focus is on severe illness, you know, how do you keep people alive," Dr. Nir Goldstein, a pulmonologist with the National Jewish Hospital, said.