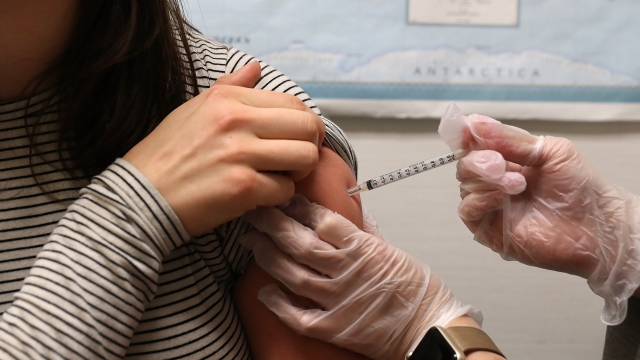 SMS
Surgeon General: Flu Is Bigger Risk To Americans Than Coronavirus
By Katherine Biek
By Katherine Biek
February 7, 2020
The CDC says there have been at least 19 million cases of the flu this season in the U.S.
SHOW TRANSCRIPT

The flu poses a bigger risk to Americans right now than the coronavirus.

That's according to U.S. Surgeon General Dr. Jerome Adams. During a speech at Fort Bragg in North Carolina this week, Adams said, "The risk of coronavirus is low to most people in the U.S. You're more likely to get, to be hospitalized or to die from the flu than the coronavirus."

Flu season typically begins in October, and this one has been particularly rough. The CDC says that as of Jan. 25 there have been at least 19 million cases of the flu, 180,000 hospitalizations and 10,000 deaths in the U.S.

At least 68 of those deaths have been children. Health officials already warned that kids who got the flu vaccine still stand at least a 42% chance of catching the virus since this season's vaccine isn't a perfect match for the influenza strain that most commonly affects children.

Meanwhile, the coronavirus outbreak has infected more than 31,500 people and killed at least 638. Although the virus has spread across the globe, the majority of the cases are in China, where the virus originated.

There are at least 12 confirmed cases of coronavirus in the U.S. All of the patients had either traveled to Wuhan, China, shortly before testing positive for the virus, or they had been in close contact with someone who had.

The U.S. has implemented travel restrictions to keep the outbreak from spreading further.