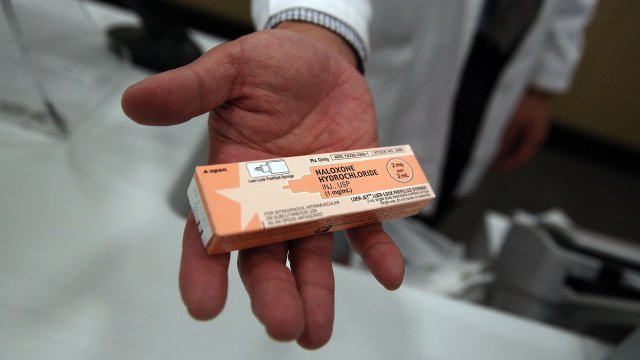 SMS
US Surgeon General Wants More People To Carry An Anti-Overdose Drug
By Cristina Mutchler
By Cristina Mutchler
April 5, 2018
The U.S. surgeon general recommends people who could be at risk for an opioid overdose or people close to them carry naloxone.
SHOW TRANSCRIPT

In the first U.S. surgeon general advisory in over a decade, Dr. Jerome Adams is calling for more Americans to carry an opioid overdose-reversal drug.

The advisory urges people who are at risk for an opioid overdose and their loved ones to keep naloxone handy and know how to use it. Adams points out the number of opioid overdose deaths has doubled in recent years and says making the drug available and using it effectively are key to ending the epidemic.

Naloxone, commonly known under its brand name, Narcan, can quickly revive an opioid overdose patient who has slowed or stopped breathing. It's used by first responders, doctors and hospitals and in recent years, has been distributed in communities and school districts.

Last year, Walgreens said it would carry a form of Narcan in all of its U.S. locations. The opioid antidote is also available without a prescription at other pharmacies in some states across the nation.