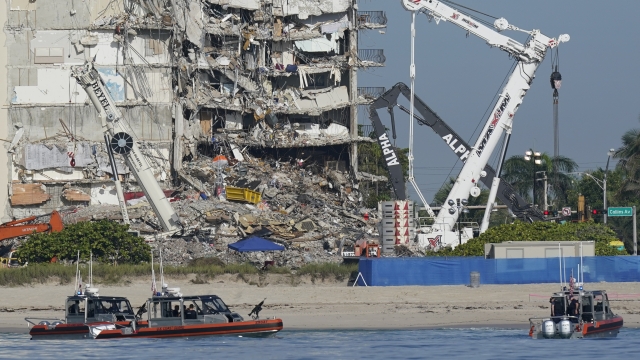 Concerns remained that the still-standing portion of the complex could also collapse and work at the site appeared to have paused early Thursday.

Rescue efforts at the site of a partially collapsed Florida condominium building were halted Thursday out of concern about the stability of the remaining structure, officials said.

Search crews that have been atop the pile of rubble for the last week stopped work shortly after 2 a.m., Miami-Dade County Mayor Daniella Levine Cava told a news conference.

The stoppage came on the same day that crews and relatives of those still missing were scheduled to meet with President Joe Biden in a visit that many hoped would provide some measure of comfort to a devastated community.

Crews noticed several expansions in cracks they had been monitoring, including 6 to 12 inches of movement in a large column hanging from the structure “that could fall and cause damage to support columns" in the underground parking garage, Miami-Dade Fire Rescue Chief Alan Cominsky said.

They also noticed movement in the debris pile and slight movement in some concrete floor slabs “that could cause additional failure of the building,” he said.

Officials will work with structural engineers and other experts to “develop options” to continue rescue operations, Cominsky said.