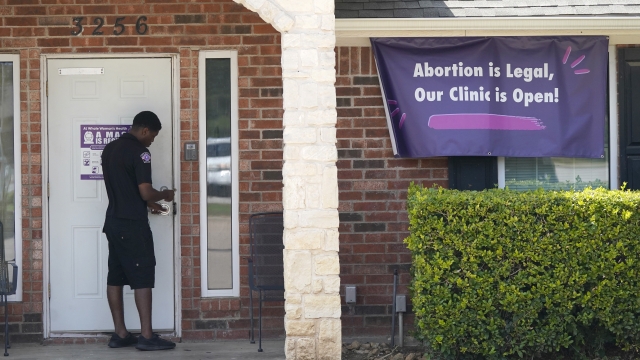 SMS
Supreme Court Upholds Texas Abortion Law
By Amber Strong
By Amber Strong
September 2, 2021
According to the Guttmacher Institute, 22 states have introduced early abortion bans. Most are caught up in court or haven't been implemented.
SHOW TRANSCRIPT

"Most people don't know that they are actually pregnant by six weeks," said president and CEO of Planned Parenthood Federation of America, Alexis McGill Johnson.

While abortion rights groups like Planned Parenthood lamented Wednesday's ruling, antiabortion organizations are hopeful, saying it the first step in returning the abortion issue to the states and gives them insight into the court's thinking on another looming case on viability, Dobbs v. Jackson Women's health. That's where Mississippi has implemented a ban on most abortions before the 15-week mark.

"This is what we have been fighting for for decades," said Mallory Quigley, vice president of communications at The Susan B. Anthony List. "We're very encouraged by the fact that just the Trump appointed justices Kavanaugh, Gorsuch and Barrett all sided in the majority."

Author and law professor Kim Wehle said, "This majority is signaling we are totally fine, with the impact this is going to have in the interim on women. We're totally fine with implementation of an unconstitutional law because of these procedural technicalities, that's why people are saying, you know, Roe versus Wade is is all but gone."

According to the Guttmacher Institute, 22 states have introduced early abortion bans. Most are caught up in court or haven't been implemented. Except, of course, Texas.

The law in Texas doesn't offer criminal charges but allows private citizens to sue any person involved in an abortion, except the woman.

While court watchers say the ruling could give insight to abortion, Wehle suggests the implications could go further.

"Across the political spectrum, you can imagine on a more progressive state saying, 'Listen, we don't care about Second Amendment rights, then we are going to ban all guns. And we're going to allow private citizens to enforce bans on guns,"she said. "And the Supreme Court has said, you know, 'We're not going to protect our own precedent under this under the Constitution.'"

Meanwhile, groups like the Trust Women a clinic in Oklahoma tell me they've taken 80 calls in the past two days and two-thirds came from Texas women hoping to cross state lines to have the procedure. They also add many of the women weren't if even that were illegal too.