Supreme Court Unlikely To Intervene In Vote Despite President's Urging 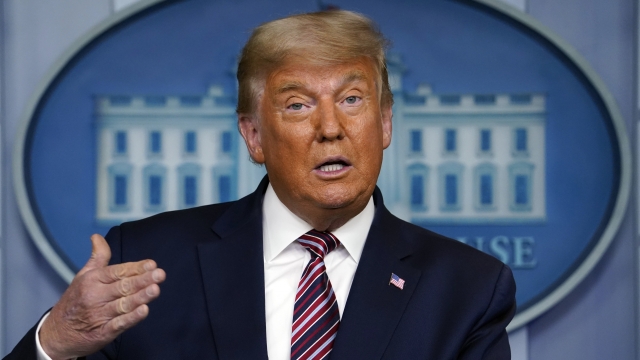 SMS
Supreme Court Unlikely To Intervene In Vote Despite President's Urging
By Alex Arger
By Alex Arger
November 7, 2020
The president has repeatedly leaned into the idea of the Court's involvement, much like during the 2000 election.
SHOW TRANSCRIPT

President Donald Trump wants to challenge election results in the Supreme Court, but he's likely going to have a hard time getting there.

The president is crying foul, calling the vote-counting process "a major fraud on our nation." Vice President Joe Biden was declared the winner on Saturday.

"We want the law to be used in a proper manner. So we'll be going to the U.S. Supreme Court. We want all voting to stop. We don't want them to find any ballots four o'clock in the morning and add them to the list. OK?"

Since that statement Wednesday, the president has repeatedly leaned into the idea of the Supreme Court's involvement, much like during the 2000 election when Bush turned to the Court to stop a Florida recount.

President Trump is focused on multiple key battleground states where the margins are thin. But he would have to persuade the court to set aside votes in two or more states where Biden leads.

And though six members of the court are conservatives, legal observers doubt that Chief Justice John Roberts wants to have a hand in deciding the election. He's tried to distance the court from politics out of fear of damaging its reputation.

It's also unclear what legal issues would be presented to the court. The president's claims are unsubstantiated, and multiple lawsuits filed by his campaign in battleground states have been dismissed.

Republicans have failed to get justices to intervene twice in Pennsylvania. Right now, one case before the Supreme Court involves a Republican appeal to exclude mail ballots that arrived after Election Day. Mail ballots have overwhelmingly favored Joe Biden, after the president led in Tuesday's in-person voting.

One election lawyer told NPR the president would likely be outside the vote margin to merit litigation. And legal experts from both parties say it's a long shot. While his claims of fraud remain unfounded, the president insists he has evidence to take his case to the nation's highest court.