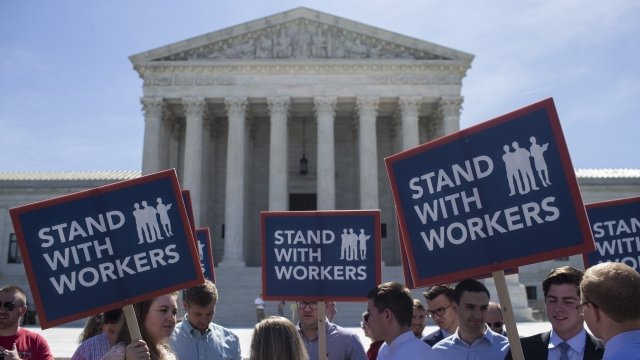 SMS
Supreme Court Rules Against Mandatory Union Dues In Janus Case
By Katherine Biek
By Katherine Biek
June 27, 2018
The court ruled public-sector employees who choose not to join a union can't be forced to pay fees to help cover the costs of collective bargaining.
SHOW TRANSCRIPT

The U.S. Supreme Court ruled Wednesday that public-sector employees who choose not to join a union can't be forced to pay fees to help cover the costs of collective bargaining.

At issue was an Illinois law that required nonmembers to contribute to unions that represent them. The petitioner, Mark Janus, argued that his non-union fees were unconstitutional and violated his First Amendment right to free speech by forcing him to pay money that the union can then spend supporting a political party he doesn't agree with.

In his majority opinion, Justice Samuel Alito wrote: "It is hard to estimate how many billions of dollars have been taken from nonmembers and transferred to public-sector unions in violation of the First Amendment. These unconstitutional exactions cannot be allowed to continue indefinitely."

The 5-4 decision on Wednesday overruled one the Supreme Court made back in 1977. And it won't just affect Illinois — roughly two dozen states have laws requiring these fair-share fees.