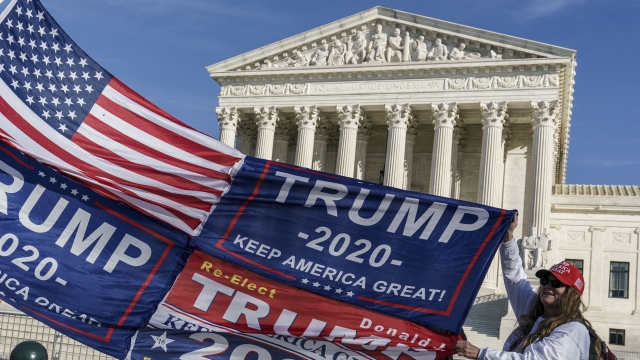 The Supreme Court threw out a Texas lawsuit Friday that had attempted to overturn President-elect Joe Biden's election win. After courts roundly dismissed dozens of challenges, the second rejection by the Supreme Court may mark the biggest - and final - legal defeat for President Trump and GOP supporters.

The Texas Attorney General Ken Paxton attempted to sue Georgia, Michigan, Pennsylvania and Wisconsin — all states won by Biden. He claimed their expansion of voting by mail during the pandemic constituted "unconstitutional irregularities" that merited preventing state electors from voting for Biden in the Electoral College on Monday.

Justices Alito and Thomas said they believe the court should have heard the case, but both also said they wouldn't set aside Biden's electoral votes. Justices Gorsuch, Kavanaugh and Barrett — all nominated by President Trump — supported the court majority, declining to embrace the baseless narrative that voter fraud cost him another four-year term.

Despite its unfounded claims, the Texas suit was backed by over a 100 Republican House members, 17 other state attorneys general and President Trump himself.

The president, who has refused to concede the election, slammed the decision on Twitter, saying: “The Supreme Court really let us down. No Wisdom, No Courage!”

And the chairman for the Republican Party of Texas hinted secession. He said in a statement that "law-abiding states should bond together and form a Union of states that will abide by the constitution.”

The Electoral College is to assemble Monday to vote to certify Biden as the 46th President of the United States.