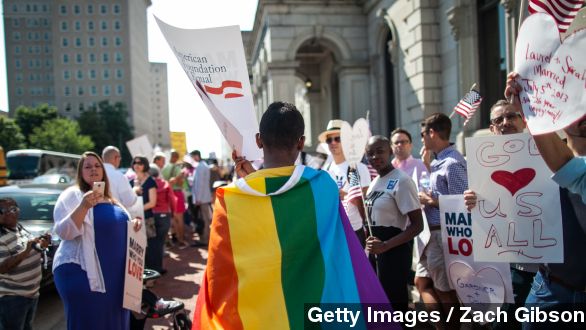 By Nathan Byrne
October 6, 2014
The Supreme Court announced Monday it would not hear challenges to decisions that struck down same-sex marriage bans in five states.
SHOW TRANSCRIPT

The Supreme Court's stance on same-sex marriage appeals in five states appears to be "We're not getting in the middle of it."

The court announced Monday it would deny review of the cases in question. So for now, lower-court decisions to strike down bans in Indiana, Oklahoma, Utah, Virginia and Wisconsin are still in play.

Which is — in a way — a we've-won-the-battle-but-not-the-war scenario for the gay rights movement. A political reporter for CBS notes it's a "setback" for the movement considering its "goal of achieving marriage equality nationwide."

But plenty of pundits have their guesses. CNN's legal analyst Jeffrey Toobin, for example, points out no appellate court yet has disputed the right to same-sex marriage.

"There's no conflict among the courts. So the justices feel like, apparently, they don't need to address the issue yet."

And one ABC article suggests justices already know the future of gay marriage — they just aren't telling us yet.

Or are they? Last month, Justice Ruth Bader Ginsburg suggested the court might wait for even more cases before jumping in — but that it would happen, eventually.

Although it's sort of a "no-decision" type of decision, the court's initial inaction could ultimately legalize same-sex marriage in 30 states, at least for the time being.