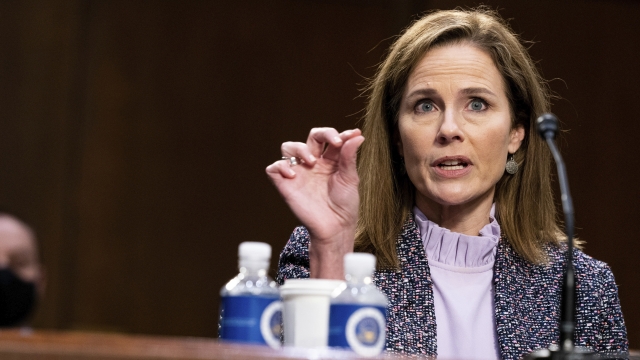 On the second and final day of questioning — Judge Amy Coney Barrett — leaving many questions unanswered.

Senators on the Judiciary Committee peppered the potential Supreme Court justice with questions about how she would respond to future cases, and where she stands on decisions of the past.

"You wrote it's more legitimate for a justice to enforce her best understanding of the Constitution rather than a precedent she thinks clearly in conflict of it," Sen. Chris Coons said.

"The whole article discussed reliance interest and emphasized courts ought not disrupt settled precedent absent very good reason to do so," Barrett said. "I think no one on the court or no one in this room would think the court ought not ever revisit its precedent."

Sen. Patrick Leahy asked: "Does a president have an absolute right to pardon himself?

"That question may or may not arise but it’s one that calls for legal analysis of what the scope of the pardon power is," Barrett said. "So because it would be opining on an open question when I haven't gone through the judicial process to decide it, it's not one in which I can offer a view."

But they also drilled down on the future of the election itself. Judge Barrett would not say whether she believed the president had the constitutional authority to delay the election.

Democrats have criticized the process as a way to seat a so called sympathetic judge on the court should the election results be contested. Barrett has not committed to recusing herself should a case come to the Court.

She'd be the third justice, joining Chief Justice John Roberts and Justice Brett Kavanaugh, who worked on the Bush side of the 2000 presidential election court battle.

"Do you think that will undermine the legitimacy of the court?," Sen. Amy Klobuchar asked.

Barrett replied: "Asking whether something will undermine the legitimacy seems to be asking whether it would be appropriate for justices who participated in that litigation to recuse and I went down that road yesterday saying it's a legal question."

Republicans — hammering home Barrett's impartiality — and commitment to the constitution.

"Very little of the time we've spent here has been her time as a judge and a scholar," Sen. Ted Cruz said.

And what her confirmation would mean for conservative women.

"This is the first time in American history that we've nominated a woman who's unashamedly pro-life and embraces her faith without apology," Senate Judiciary Committee chairman Lindsey Graham said. "And she's going to the court. Seat at the table is waiting on you."

The tone — exponentially less hostile than both the Gorsuch and Kavanaugh confirmations. The Committee is poised to send Barrett's nomination to the full Senate next week likely along party lines.