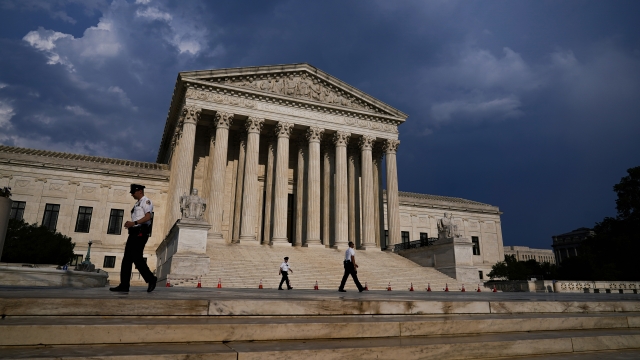 A unanimous Supreme Court ruled Monday that thousands of people living in the U.S. for humanitarian reasons are ineligible to apply to become permanent residents.

Justice Elena Kagan wrote for the court that federal immigration law prohibits people who entered the country illegally and now have Temporary Protected Status from seeking “green cards” to remain in the country permanently.

The designation applies to people who come from countries ravaged by war or disaster. It protects them from deportation and allows them to work legally. There are 400,000 people from 12 countries with TPS status.

The outcome in a case involving a couple from El Salvador who have been in the U.S. since the 1990s turned on whether people who entered the country illegally and were given humanitarian protections were ever “admitted” into the United States under immigration law.  Kagan wrote that they were not. “The TPS program gives foreign nationals nonimmigrant status, but it does not admit them. So the conferral of TPS does not make an unlawful entrant...eligible" for a green card, she wrote.

The House of Representatives already has passed legislation that would make it possible for TPS recipients to become permanent residents, Kagan noted. The bill faces uncertain prospects in the Senate.

President Joe Biden has said he supports the change in the law. But his administration, like the Trump administration, argued that current immigration law doesn't permit people who entered the country illegally to apply for permanent residency.

On the other side were immigrant groups that argued many people who came to the U.S. for humanitarian reasons have lived in the country for many years, given birth to American citizens and put down roots in the U.S.

Federal courts around the country had come to conflicting decisions about whether the grant of TPS status was, by itself, enough to enable an immigrant to try to obtain permanent residency.

Former President Donald Trump tried to cancel the program for many immigrants, stoking fear they could be sent back to their homelands where they haven't lived in many years.

“All of these families that are established in the United States and have lived in our communities for decades faced a very real threat,” said Lisa Koop, a lawyer with the National Immigrant Justice Center who also teaches at Notre Dame's law school.

In 2001, the U.S. gave Salvadoran migrants legal protection to remain in the U.S. after a series of earthquakes in their home country.  People from 11 other countries are similarly protected. They are: Haiti, Honduras, Myanmar, Nepal, Nicaragua, Somalia, South Sudan, Sudan, Syria, Venezuela and Yemen.

Monday's decision does not affect immigrants with TPS who initially entered the U.S. legally and then, say, overstayed their visa, Kagan noted. Because those people were legally admitted to the country and later were given humanitarian protections, they can seek to become permanent residents.

The Supreme Court said Monday that for now it’ll be up to Congress, not the court, to decide whether to change the requirement that only men must register for the draft. It's one of the few areas of federal law where men and women are still treated differently.

In a statement, three justices said Congress is weighing whether to change the Military Selective Service Act, which requires men but not women to register for the draft when they turn 18. They said that was a reason for the court to kick the matter back to lawmakers.

“It remains to be seen, of course, whether Congress will end gender-based registration under the Military Selective Act," Justice Sonia Sotomayor wrote in a statement for herself, Justice Stephen Breyer and Justice Brett Kavanaugh. “But at least for now, the Court’s longstanding deference to Congress on matters of national defense and military affairs cautions against granting review while Congress actively weighs the issue.”

In recent years, bills to require women to register for the draft have been proposed in the House but not gone anywhere. Just last year, however, a congressional commission concluded that the “time is right” to extend the obligation to register to women. The Senate Armed Services Committee held a hearing on the report this year, and Sotomayor pointed to the report and the hearing, suggesting Congress is currently studying the issue.

The question of whether it's unconstitutional to require men but not women to register could be viewed as one with little practical impact. The last time there was a draft was during the Vietnam War, and the military has been all-volunteer since. But women's groups are among those arguing that allowing the male-only requirement to stand is harmful.

Ria Tabacco Mar, director of the American Civil Liberties Union’s Women’s Rights Project, who had urged the court to take up the issue, said that requiring men to register imposes a “serious burden on men that's not being imposed on women.

Men who do not register can lose eligibility for student loans and civil service jobs, and failing to register is also a felony punishable by a fine of up to $250,000 and five years in prison. But Tabacco Mar said the male-only requirement does more than that.

“It's also sending a tremendously harmful message that women are less fit than men to serve their country in this particular way and conversely that men are less fit than women to stay home as caregivers in the event of an armed conflict," said Mar, who represents the National Coalition For Men and two individual men who challenged the law. “We think those stereotypes demean both men and women.”  Even if the draft is never used again, retaining the requirement sends a “really damaging message,” she said. On Monday, she urged Congress in a statement to "update the law either by requiring everyone to register for the draft, regardless of their gender, or by not requiring anyone to register.”

A group of retired senior military officers and the National Organization for Women Foundation were among those that had urged the court to take the case.

The issue of who has to register for the draft has been to the court before. In 1981, the court voted 6-3 to uphold the men-only registration requirement. At the time, the decision was something of an outlier because the court was regularly invalidating gender-based distinctions in cases about other areas of the law. Many of those cases were brought by the founding director of the ACLU’s Women’s Rights Project, Ruth Bader Ginsburg, who became a justice in 1993.

The last time the high court considered the Military Selective Service Act, then-Justice William Rehnquist explained that the purpose of registration “was to prepare for a draft of combat troops.” He said that because women could not serve in combat, the law was not unlawful sex discrimination that violated the Constitution.

But military policy has changed. In 2013, the Defense Department lifted the ban on women serving in combat. Two years later, the department said all military positions would be open to women without exception.

The Biden administration had urged the justices not to take the case and to let Congress instead tackle the issue. Administration lawyers wrote in a brief that any "reconsideration of the constitutionality of the male-only registration requirement ... would be premature at this time” because Congress is “actively considering” the issue.

Also on Monday, the court:

— Agreed to hear a case in which the Biden administration wants to halt a lawsuit over FBI surveillance of Muslims in California because it could reveal “state secrets.”

— Turned away an appeal questioning the federal Food and Drug Administration's authority to regulate electronic cigarettes.