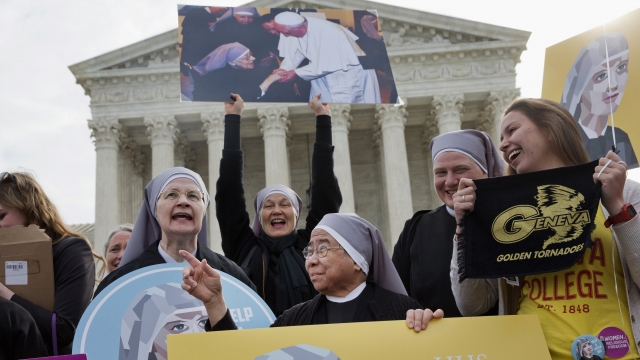 SMS
Supreme Court Weighs Trump Administration's Limits On Birth Control
By Shira Tarlo
By Shira Tarlo
May 6, 2020
The justices considered whether the administration can let employers to refuse to cover birth control based on religious or moral objections.
SHOW TRANSCRIPT

The Supreme Court on Wednesday heard oral arguments on whether the Trump administration can allow more employers to opt out of providing free birth control coverage in their insurance plans because of religious or moral objections.

The case pits religious freedom against access to contraceptives.

The Affordable Care Act requires insurance companies to cover birth control methods to women as part of preventative care, providing over 61 million Americans with contraceptives without out-of-pocket costs. Since its passage in 2010, the question of whether employers can refuse to comply with the regulations based on religious objections has remained largely unsettled.

In 2017, the Trump administration took a side in the debate, issuing regulations offering exemptions for tax-exempt organizations, like nonprofits, "with sincerely held moral convictions opposed to coverage of some or all of contraceptive or sterilization methods."

Pennsylvania and New Jersey challenged the administration rules, arguing in part that states would have take on the responsibility of providing coverage for those women unable to get it from their employer.

Last may, a federal appeals court blocked the rules from taking effect. Citing government data, the lower court said between 70,000 and 126,000 women would lose access to insurance-covered birth control if the rules were implemented. Reproductive rights advocates say that number could be much higher.

In response, the Trump administration and the Little Sisters of the Poor, a Roman Catholic organization that offers help to senior citizens living in poverty, asked the Supreme Court to hear the case. Little Sisters says providing coverage is at odds with its members' faith.

Wednesday marked the third time the court heard arguments over the contraceptive mandate, but the first since Neil Gorsuch and Brett Kavanaugh joined the bench and cemented the court's 5-4 conservative makeup.

It's also the third day justices heard cases by phone as a result of the coronavirus pandemic. Justice Ruth Bader Ginsburg dialed in to the teleconference from a hospital, where she is being treated for a benign gallbladder condition.

The court is expected to issue its decision in June.