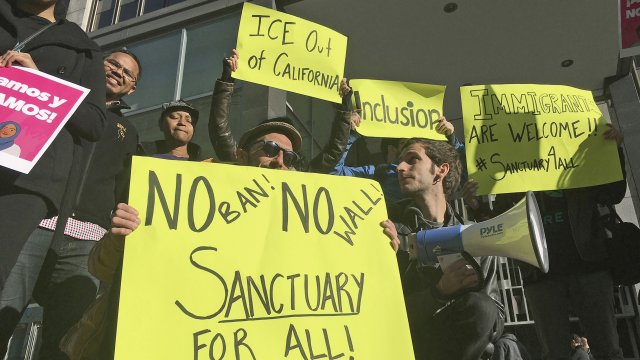 The Supreme Court dealt a blow to President Donald Trump's immigration agenda on Monday. The court refused to hear the White House's challenge to a California law that limits cooperation between ICE and local police.

President Trump has made hardline immigration policies a focus of his presidency. That includes many attempts — inside and outside the courtroom — to crack down on sanctuary states and cities. These are localities that refuse to help ICE identify and arrest undocumented immigrants.

Among other things, the California law in question prohibits local law enforcement from complying with ICE detainers — that's when ICE asks a local jail to hold an undocumented inmate for an additional 48 hours to facilitate a custody transfer.

The state does cooperate with federal agents if they have a judicial warrant or if the immigrants have been convicted of serious or violent crimes.

"I don't think the public quite understands what their politicians are doing with regard to putting themselves and their family at risk," ICE Acting Director Matthew Albence told Newsy last year.

But California and other sanctuary places say they have the right to decide for themselves how to police their communities. Besides, they argue that fully cooperating with ICE would undermine the trust of immigrants and thereby make their city less safe.

"When victims and witnesses are afraid to come to court because they believe that there's the potential for ICE agents to scoop them and tear them from their families, then they simply stop participating," Cook County State's Attorney Kim Foxx said in February.