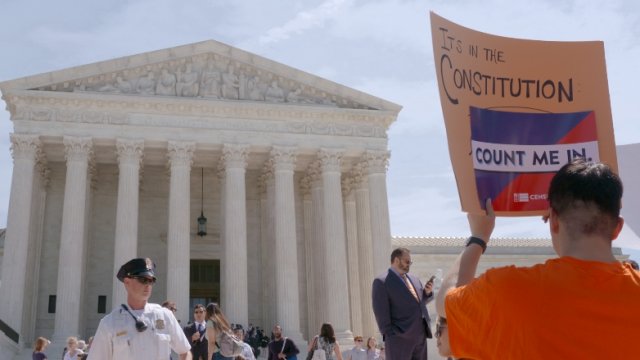 The Supreme Court will decide whether the Department of Commerce can add a citizenship question to the 2020 census.

The Supreme Court heard a tense round of arguments Tuesday as the high court prepares to decide  whether the Trump administration can add a citizenship question to the 2020 census. The state of New York is leading the charge. Their lawyer told the nine-member panel that re-adding the question, which was removed nearly 70 years ago, would skew the accuracy of the data. Supreme Court expert Amy Howe says the liberal justices and those who brought the case believe some won't fill out the questionnaire at all out of fear.

"If you have the citizenship question on the census, you're going to have households with undocumented immigrants much less likely to respond," she explained.

That, they say, could hurt the report's accuracy. The Census Bureau agreed. It issued numerous reports saying not only would adding the question cost more, but it expects 5.8% of the population won't respond. It says that's a conservative estimate.

It's all about representation and money. The data is used to allocate the 435 members of the House of Representatives. If less people respond, those areas may receive less representation.

"States that have large populations of Hispanics and undocumented immigrants tend to skew Democratic. This could result in fewer democratic seats in the house of representatives," said Howe.

It also determines the electoral votes, so blue states could be in trouble there as well. Howe says $900 billion of funding used census data for 320 federal programs in fiscal year 2016. These communities could stand to lose a lot of money that typically helps them.

The federal government, on the other hand, says it's bringing back the citizenship question to help the Department of Justice better enforce the Voting Rights Act. It also says it exists in other census questionnaires sent to fewer households across the country. Critics like the protesters outside the Court say Secretary Wilbur Ross is just looking for a reason to add the question.

The justices, who typically joke around throughout arguments, were interrupting each  other more than usual. Howe thinks this is an indication of a divided court.

"It seems like we're looking at one of the classical 5-4 decisions with conservative justices on one side and the liberal justices on the other side," said Howe.

A decision won't be handed down until June, the same month the census is scheduled to be finalized for printing.