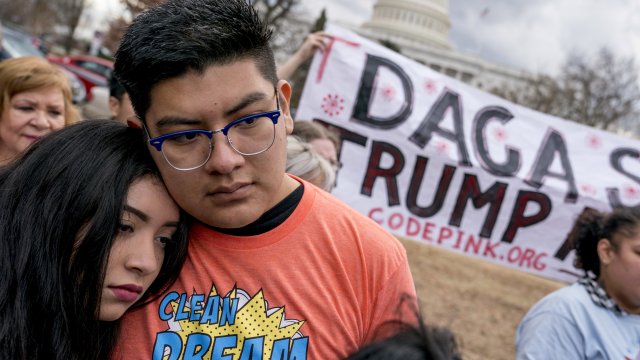 The Supreme Court on Thursday blocked the Trump administration's yearslong attempt to end DACA. That's the Obama-era program that shields from deportation 650,000 undocumented immigrants who came to the U.S. at a young age.

For now, Dreamers can continue to live and work legally in the U.S.

"As a Dreamer myself who's been in the United States since I was 10 months of age, I cried tears of joy this morning when the decision came out. This decision has lifted a cloud of uncertainty that has run my life for years," said Rodrigo Pimentel, a DACA recipient.

"It's just surreal to see that the Supreme Court sided with us. It's amazing," said Juliana Macedo do Nascimento, also a DACA recipient.

"My phone kept going, ding, ding, ding, ding. And I was like, oh my gosh. I got up really fast and I went to check it, and it was everyone telling us it passed. Like, no way," said Diana Sanchez, a DACA recipient who has four American citizen children.

In a stunning rebuke to the Trump administration, the justices rejected the argument that President Obama illegally created the immigration program eight years ago. In a 5-4 decision, Chief Justice John Roberts invalidated President Trump's "capricious" attempt to end DACA. But he said the government can try again.

"Very soon, they could do a longer memo, a longer analysis of the illegality or whatever the reasons are, jump through the proper hoops that are necessary, but then that's going to be tied up in court again," said Ilya Shapiro, director of the CATO Institute's Center for Constitutional Studies.

Shapiro says while the ruling gives the White House another shot at winding down the DACA program, it all comes down to the 2020 election. President Trump alluded in a tweet he'd start a new legal fight over DACA.

"If Trump is reelected, then that lawsuit would then continue and be resolved in a year or two. And if he's not reelected, then, you know, presumably [Joe] Biden would not pursue that course and we'd be done with it," Shapiro said.

Recent polls show a vast majority of Americans want DACA recipients to receive a path to citizenship, which is not included in the program. Bipartisan efforts to legalize the status of Dreamers have failed multiple times in the past. And Shapiro believes the court's decision to keep DACA alive isn't helpful.

"If the court had allowed this rescission, then that would have put a lot of pressure on Congress and on the administration to put in a fix for the Dreamers and reopen the discussion over immigration reform, which now is just poisoned even further," Shapiro said.

As for Dreamers, they vow to continue their fight to get permanent protections for themselves and their family members.

"This decision, it reaffirmed that yes, our home is here, and it's time for Congress to enact that into law," Pimentel said.

"We have that time, that room to breathe so that we can fight for permanent protections for folks, right? And not just for DACA recipients, but also for our parents and our communities and everybody else who got us here," said Juliana Macedo do Nascimento.