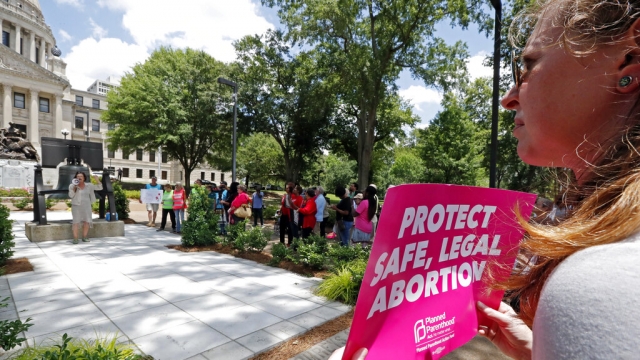 The case, Dobbs v. Jackson Women’s Health Organization, deals with a 2018 Mississippi law that bans most abortions after the 15th week -- often, before a woman knows she’s pregnant. The law was struck down by lower courts, saying it was unconstitutional. Under Roe, and later affirmed in 1992’s Planned Parenthood v. Casey, the court said states could not ban abortions before fetal viability -- usually around 24-28 weeks. Several conservative states, like Mississippi, have approved pre-viability bans on abortions.The court will have to decide whether those bans are constitutional.

Mallory Quigley, with the anti-abortion rights group Susan B. Anthony List, tells Newsy should the justices agree with the state, the aftermath of this case could impact abortion nationwide.

“This would set a new standard for abortion jurisprudence. And it would begin the process of taking the handcuffs off the states. And the handcuffs that were put there by seven unelected men in 1973. And the Roe v. Wade decision which, in a single day, negated all state protections for unborn children and for women. It would say that this state has the right to protect babies at this point and reflect the values of the people that live there,” said Quigley.

According to the pro-abortion rights group Center for Reproductive Rights, individuals in 30 states would be in jeopardy of losing access to abortion should Roe v. Wade be overturned.

“It's very common procedure; one in four women seek it. And the idea that suddenly, for many across the country, it will be illegal or that much harder to access means It’ll be a time even worse than now, where the privileged will be able to continue seeking the care and those who don't have access, means, an ability to travel, will go without this piece of health care,” explained Leila Abolfazli, director of federal reproductive rights for the National Women's Law Center.

The Supreme Court will likely take the case up in the fall with a decision not expected until next year.