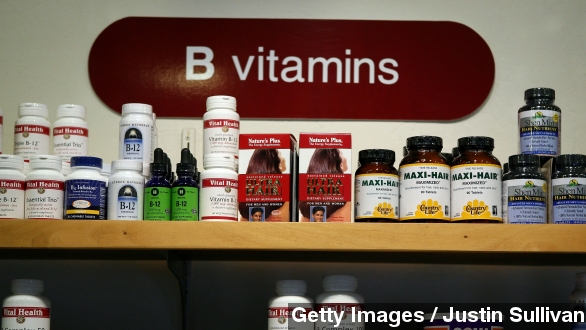 SMS
Supplements Might Not Prevent Memory Loss After All
By Erik Shute
By Erik Shute
November 13, 2014
A comparative study by Wageningen University in the Netherlands found vitamin B12 and folic acid do not offer any significant benefits for memory.
SHOW TRANSCRIPT

High levels of this organic compound have been found in patients who suffer from memory problems. A researcher from the study explains the reasoning.

"Since homocysteine levels can be lowered with folic acid and vitamin B12 supplements, the hope has been that taking these vitamins could also reduce the risk of memory loss and Alzheimer's disease."

So researchers tested around 3,000 adults with an average age of 74. One group took B12 and folic acid supplements every day for two years. Another group took a placebo for the same amount of time. Researchers conducted memory and thinking tests at the start and end of the study. Unfortunately, at the end there was no convincing evidence that memory loss had been stopped or corrected in the experimental group.

Coincidentally, the B12 and folic acid did work as advertised and actually lowered the amount of homocysteine in the patients.

Doug Brown, the director of research and development at Alzheimer's Society, agrees with the new findings and notes as we get older we are less able to absorb B vitamins, which could also explain why they are ineffective. Going forward he suggests:

“More trials are needed to determine if there is a benefit of these vitamins for people already with dementia, or for people without high levels of homocysteine, as no one in this trail [sic] had dementia or was known to develop it.”

A doctor on CBS says we need to scrap vitamins altogether.

ANCHOR: "Are there any supplements that help with memory?"

DR. AGUS: "The simple answer is no. Over and over again we've tried to take these quick fixes. ... Either you use it for lose it. You need to find ways that work for your brain."

Researchers published the current study in the journal Neurology. Besides vitamin supplements, several studies say exercising, getting plenty of sleep and not smoking are other methods used to slow or stop memory loss.

This video includes images from Getty Images and icethim / CC BY 2.0.