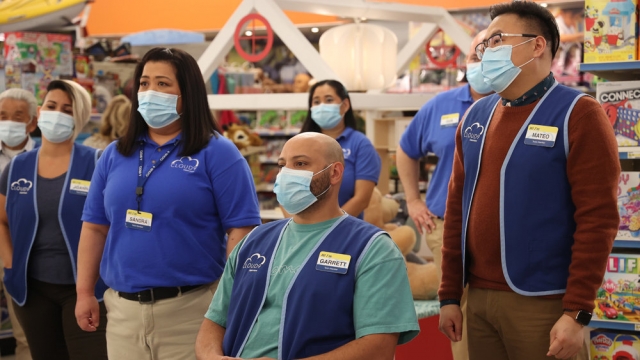 SMS
NBC's 'Superstore' Ends As A Time Capsule For The Everyday American
By Casey Mendoza
By Casey Mendoza
March 25, 2021
Over six seasons, the workplace sitcom about a big box store tackled the issues facing the working class.
SHOW TRANSCRIPT

After six years, NBC's "Superstore" is taking its final bow and turning the lights off at Cloud 9.

Actor Ben Feldman: "We came in. We did Obama, Trump, Biden, right? What a time in America, in American politics and for the working class, for culture, for sort of everything."

Executive Producer Jonathan Green: "Our first priority was to reflect the real world and what's going on right now."

Actress Lauren Ash: "The show is such a time capsule for this period of time. We really, throughout the seasons, were always kind of commenting on what was current, both in America and around the world, not only in just themes, but also in specifics."

Last year, the show's portrayal of immigration issues caught the attention of researchers at the Define American advocacy group and the Norman Lear Center. Their study found that viewers who felt a sense of friendship with the character of Mateo Liwanag, a gay Filipino undocumented immigrant, were more likely to be vocal about immigration issues.

Actor Nico Santos: "I get messages all the time on social media about how the story has touched and affected them, because either they have family members who are undocumented, or they themselves have documented."

Santos: "I never really realized how much of a mirror it really held up to what was going on until I started hearing from everybody. And it's been incredible to hear the stories."

That's the legacy "Superstore" leaves behind. It was a workplace comedy that humanized the realities low-wage workers face. It poked fun at the chaos of the past six years, and befitting of its run, it ends with the backdrop of the pandemic.

Feldman: "Everything was presented with compassion and reality, and sympathy and empathy. And I think that's something we're really proud of."

Santos: "I think that's a great legacy to be able to leave behind."