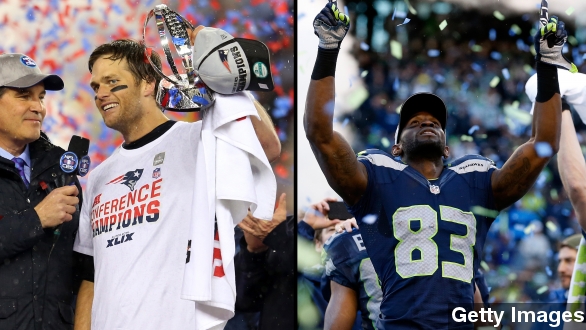 Well, they're back again. And, after a two-season hiatus, so are they. The defending champion Seattle Seahawks will take on the New England Patriots in Super Bowl XLIX.

In the aftermath of the NFC Championship, words like "miracle," "remarkable," and "improbable" found their way into headlines. And rightfully so.

Seattle rallied from a 19-7 second-half deficit. And with the aid of a successful onside kick, scored two touchdowns to take the lead with just over a minute to spare.

The game eventually moved into overtime, when Russell Wilson connected with WR Jermaine Kearse for a 35-yard touchdown pass for the 28-22 victory in what is easily one of the most thrilling comebacks in recent years.

"Just thinking about that game and ... winning the Super Bowl last year and people doubting what we could do. It's just an emotional time for me," Wilson said.

The AFC Championship, on the other hand, wasn't nearly as tight. Tom Brady, Bill Belichick and company steam rolled Andrew Luck and the Indianapolis Colts 45-7.

The Pats dominated with a balance offensive attack. Brady racked up 226 yards passing with three touchdowns.

While LeGarrette Blount rumbled through Colts' defenders for 148 yards rushing and barreled into the end zone for three touchdowns.

Sunday's Patriot victory also did quite a number on the NFL record books.

Coach Bill Belichick, meanwhile, nabbed his 21st playoff victory. With it, he moved past the great Tom Landry and became the winningest coach in post-season history.

With the win, the Patriots also tied the Dallas Cowboys and Pittsburgh Steelers for most Super Bowl appearances with eight each.

The Seahawks will attempt to become the eighth team in NFL history to win back-to-back championships. The last team to accomplish that feat is their opponent, the Patriots, back in 2004 and 2005.

T​his video includes images from Getty Images and music from Wake / CC BY 3.0.