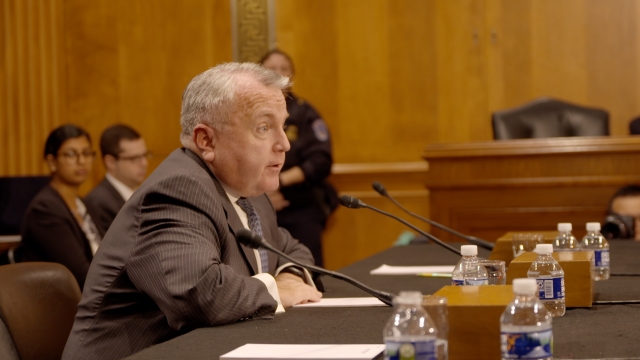 SMS
Deputy Secretary Breaks With State Department On Yovanovitch's Firing
By Alexandra Miller
By Alexandra Miller
October 30, 2019
A confirmation hearing for John Sullivan, the nominee for U.S. ambassador to Russia, turned toward the president and Ukraine.
SHOW TRANSCRIPT

A confirmation hearing to become the next ambassador to Russia, with a heavy focus on Ukraine. Deputy Secretary of State John Sullivan spent much of his two-plus hours in front of the Senate Foreign Relations Committee discussing the now-infamous second phone call between the American and Ukrainian presidents.

Sullivan, who was confirmed to his current position by a vote of 94-6,  was responsible for removing then-Ambassador to Ukraine Marie Yavonovitch from her post. He acknowledged that he told her she was being brought back though she did nothing wrong.

Sullivan, who is No. 2 at the State Department, said Yavanovitch's standing had been discussed for a period of time and that Secretary of State Mike Pompeo had pushed back and sought justification for her recall for months before removing her. Perhaps most surprisingly, Sullivan said he was aware there was a coordinated effort to smear and remove Yovanovitch.

Sullivan sidestepped criticizing the White House directly, even for its work with Rudy Giuliani, who is the president's personal attorney and not an actual official, despite his unofficial role in foreign policy discussions. Sullivan distanced himself from many of the administration's decisions. Ranking member Sen. Bob Menendez criticized it as a "hear no, see no, speak no evil approach."

Sen. Marco Rubio was the only Republican who discussed the Ukraine controversy, saying while he wasn't sure the president's actions were illegal, he is deeply concerned about the phone call itself.

While Sullivan's Senate confirmation to the Russia ambassadorship is likely, he may not be done with Capitol Hill just yet. Democrats in the House may call him to testify in their ongoing impeachment inquiry.