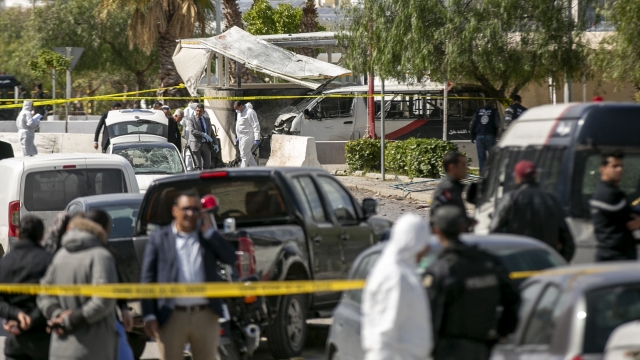 SMS
Suicide Bombers Detonate Near U.S. Embassy In Tunisia
By LeeAnne Lowry
By LeeAnne Lowry
March 6, 2020
Both of the attackers and one police officer are reported dead. Five others are wounded.
SHOW TRANSCRIPT

The New York Times reports the bombers drove a motorcycle toward a police truck near the embassy, then self-detonated.

State media reports both of the attackers and one police officer are dead. Four other officers and one civilian are wounded. The U.S. Embassy tweeted that emergency personnel are responding to the explosion.

It's still unclear if the bombers were associated with an extremist group, but the country's interior ministry has referred to the bombing as a terrorist attack.

Tunisia's been under a state of emergency since three major terrorist attacks killed dozens of people in 2015. The U.K.'s travel advisory against Tunisia lists the country's main terrorist threats as Al-Qaeda and Libya-based extremists linked to ISIS.