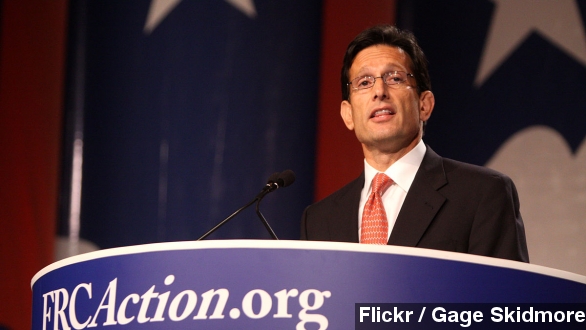 It might be the biggest political upset of the year — and it happened in a race almost completely overlooked by national media, until Tuesday. (Via Flickr / Gage Skidmore)

LOU DOBBS: "Cantor has been widely expected to win this Republican primary." (Via Fox Business)

To be clear, this was supposed to be a blowout, a cakewalk for Cantor. He's a household political name and the second-ranking Republican in the GOP's last bastion of government: the House.

​And as late as Tuesday morning, The Washington Post began its story on the primary race with, "A conservative challenger is expected to fall far short."

So, how did Cantor lose? The short answer: the Tea Party dominates midterm elections. It's an especially strong force in Cantor's district, Virginia's seventh. (Via WTVR)

And, for the most part, the Tea Party really doesn't like Eric Cantor. They let him know it at a meeting of Republican activists last month.

Cantor is undoubtedly conservative — National Journal ranked him as the 80th most conservative rep in a House of 233 Republicans.

And he's one of the president's frequent and more prominent critics.

CANTOR: "This law is a disaster. Obamacare is on borrowed time." (Via CBS)

But he's also part of the Republican leadership, which is not terribly popular among grassroots GOP. And he had to battle Tea Party Republicans to end last year's government shutdown. (Via U.S. Congress)

But perhaps most important, Cantor has shown support for immigration reform — or as Tea Partiers call it, "amnesty." He was perhaps the best point of contact in the GOP for Democrats looking for a deal.

Tuesday night, a politics writer at The Washington Post called Cantor's loss "A disaster for Obama" and a huge blow to hopes of an immigration compromise. (Via Twitter / @Goldfarb)

Cantor's opponent, David Brat, is a college professor who had $40,000 of campaign funds in the bank as of March filings, compared to Cantor's $2 million.

Also worth noting, Tuesday's loss for Cantor, who is Jewish, means Republicans have voted out their only non-Christian lawmaker in Congress.