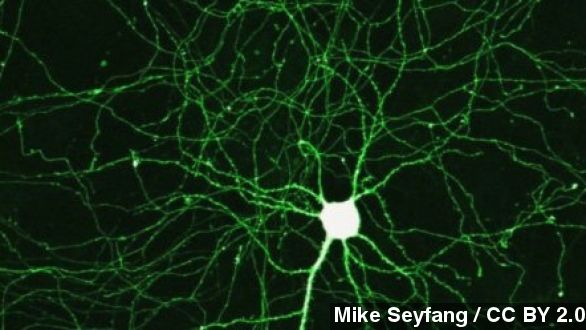 By Nathan Giannini
August 21, 2014
The study, by researchers at Columbia University Medical Center, suggests those with autism have too many cellular connections in their brains.
SHOW TRANSCRIPT

Children with autism ​might have extra snypases, or cellular connections, in their brains. That's according to researchers from Columbia University Medical Center.

Brain synapses are the connections between nerve cells that allow information to travel from one neuron to another. There are trillions of these synapses in the human brain.

The researchers studied the brains of 26 children with autism who had died of other causes between the ages of 2 and 20, as well as 22 brains from children without the disorder.

According to The New York Times: "In typical brain development, there is an explosion of synapses very early and then a pruning process begins. That process is necessary to ensure that different areas of the brain can develop specific functions and are not overloaded with stimuli."

The researchers reportedly found, in the brains of younger children, there was very little difference in the number of synapses between the two groups. But when it came to the adolescents, those with autism had significantly more than those without.

According to a Columbia press release, researchers have studied a drug that sped up that pruning process to normal levels in mice with autism-like behaviors. While the drug can't be used in humans, a professor not involved in the study said:​ "The fact that we can see changes in behavior suggests that autism may still be treatable after a child is diagnosed, if we can find a better drug."

The study was published Thursday in the journal Neuron.