Study Shows Some Paralympic Sprinters May Have It Harder Than Others 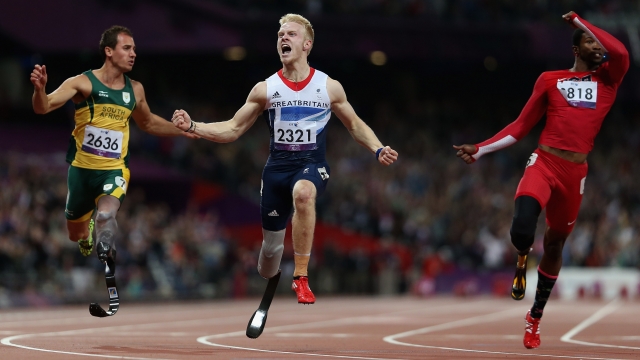 SMS
Study Shows Some Paralympic Sprinters May Have It Harder Than Others
By Grant Suneson
By Grant Suneson
March 16, 2016
A new study determined left leg amputee athletes may be at a competitive disadvantage during races because the track forces them to turn left.
SHOW TRANSCRIPT

With the 2016 Paralympic Games coming up in September, researchers may have found evidence that some paralympic sprinters are at a major disadvantage.

A University of Colorado, Boulder study published in the Journal of Experimental Biology investigated whether it's harder for left leg amputee runners to turn left while sprinting around a curved track.

200 and 400 meter races are run counterclockwise, forcing sprinters to turn left. Runners with left leg amputations have to use their prosthesis to change direction, which generates less force and costs them precious time.

To test the hypothesis, researchers studied both right and left leg amputees and had them run counterclockwise, like a normal race but also clockwise as a control.

That may not sound like much time, but the study’s lead writer, Paolo Taboga, said, "A 4 percent reduction in speed during a competitive sprint event could mean the difference between a gold medal and no medal at all."

In order to combat the disadvantage, Taboga recommends placing left leg amputees in the outside lanes, where the curve isn’t as sharp so runners can turn more easily.

Taboga also said he wants to help prosthetic technology improve enough to eliminate the disadvantage for athletes and better the quality of life for anyone who uses a prosthesis.

This video includes clips from LIM Innovations and images from Getty Images.