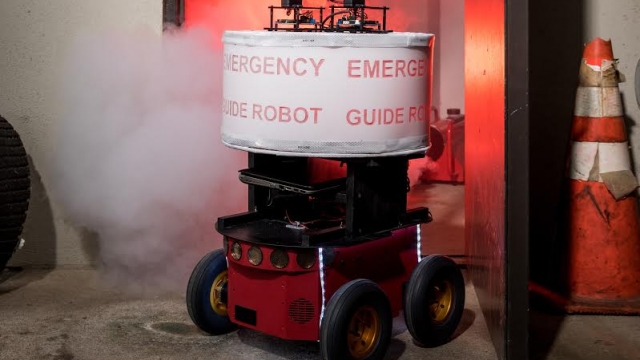 SMS
Study Shows Humans Will Trust Robots Over Common Sense To Save Them
By Ryan Biek
By Ryan Biek
March 1, 2016
Participants trusted a robot to get them out of an emergency situation, even after being shown the robot was unreliable.
SHOW TRANSCRIPT

Maybe we've grown a little too accustomed to technology saving our skin.

A new study from Georgia Tech found people put too much trust in robots to guide them out of emergency situations, even after they'd been shown the robots weren't reliable.

Twenty-six mostly college-age students were first guided to a room by a brightly colored robot labeled "Emergency Guide." In half the cases, though, it led participants in the wrong direction.

Artificial smoke was later pumped into the room to make participants think there was a fire.

Yet instead of walking toward the door clearly marked with exit signs, every participant followed the robot to the other side of the building to a room blocked by furniture — even the participants who'd been led astray by the robot before.

One of the researchers said, "We absolutely didn't expect this."

The researchers noted the participants may have followed the robot in part because they didn't believe the emergency was real.

Previous studies have shown, though, people often don't exit buildings despite the sound of fire alarms.

The study does show that using robots to guide people to safety could be effective in real emergencies. But the robots had better work perfectly.