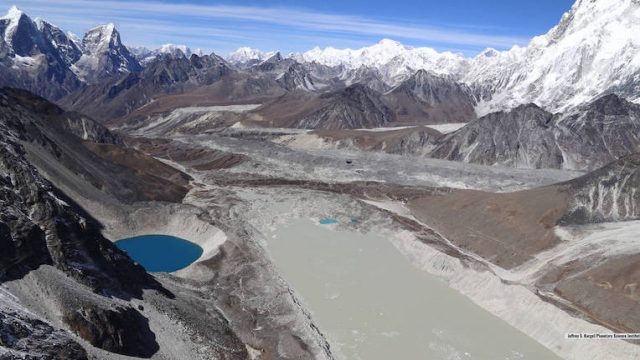 Even sky-high in the Himalayas, where daring climbers reach the summit of Mount Everest, climate change is occurring in this region scientists call the Earth's third pole.

According to new findings, published in the journal Nature Climate Change, glaciers have retreated markedly in the past 30 years. Their melting is contributing to rising sea waters and to glacial lakes growing in mass by nearly 50 percent.

In this report, focused on the Himalayas, NASA explains the findings from three decades of satellite data.

"This landscape is changing. Many of the glaciers on popular trekking routes have retreated and given rise to new and larger glacial lakes, which typically form when glacial melt water is blocked by glacial ice dams or glacial sediment," NASA said.

Worldwide, the study says, both the size and the number of glacial lakes are increasing as climate change slowly melts the glaciers away. The researchers warn the situation poses a significant flooding threat and a disruptive change in ocean temperatures.