Study Says A Lot Of Juul's Twitter Followers Are Underage 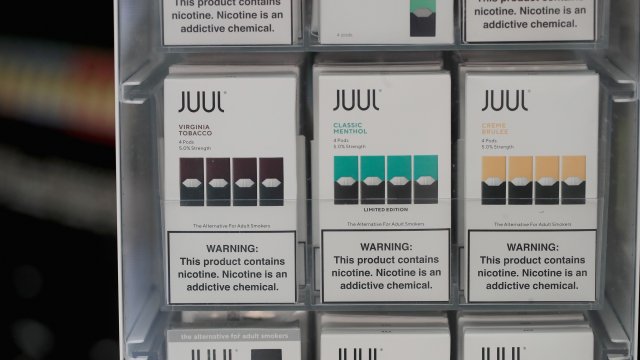 New research in JAMA Pediatrics says almost half of e-cigarette company Juul's Twitter followers are underage, according to data collected in 2018.

A new study in the journal JAMA Pediatrics estimates that close to half of Juul's Twitter followers are minors.

Researchers wanted to get an idea of how many young people follow the most popular e-cigarette company on Twitter. So they collected data from Juul's active public followers in April 2018, then used an algorithm to predict their ages.

The results showed that roughly 45% of Twitter users who followed the account @JUULvapor were 13-17 years old, younger than the federal minimum age to buy tobacco. Around 80% of followers fell under the 13-20 age group.

But Juul says the findings "differ significantly" from data it received from Twitter, which indicated that 3.9% of its followers in May 2018 were between 13 and 17.

In a statement to Newsy, the company said it does "everything we can to prevent youth from engaging our company on Twitter."

Juul did start addressing underage use of its vaping products last year, after the FDA cracked down on e-cigarette companies that it claimed were marketing to young people.

Juul took action in a few ways, like restricting certain flavors and updating age verification systems for online sales. It also shut down its Facebook and Instagram accounts and limited Twitter activity to non-promotional material.

Still, the research team says social media might've helped fuel the company's popularity. It found that online conversations about Juul were more likely to be about using and buying the vape devices and not about quitting smoking.

Calling the youth vaping trend an "emerging public health issue," the study's lead author points out that e-cigarette brands would benefit from better demographic data from social media companies "to help ensure that the nation's youth are protected from aggressive marketing for age-restricted products."

According to the FDA, last year, more than 3.6 million middle and high school students reported they were currently using e-cigarette products.