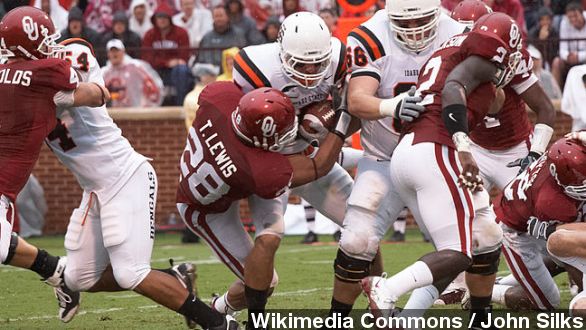 By Matt Moreno
May 14, 2014
A study by the University of Tulsa showed even players without a history of concussion still had smaller hippocampus regions.
SHOW TRANSCRIPT

Here's even more evidence that playing football could be bad for your brain.

A study conducted at the University of Tulsa surveyed 75 people — 25 college football players who had at least one concussion, 25 who had zero documented concussions and 25 who weren't student athletes. (Via The Journal of the American Medical Association)

Researchers found out those student athletes who played football had smaller hippocampus regions — the part of the brain that controls emotions and memories — than the students who didn't play. (Via Wikimedia Commons / Washington Irving / John Silks)

​The results showed both football players with and without documented concussions were affected. The study is just more bad news for a sport that's already received massive attention for its negative effects on the brain.

The NFL made headlines last year when it reached a $765 million settlement with former players who said playing in the NFL caused long-term brain damage the league didn't do enough to combat. (Via The New York Times)

A judge later rejected that settlement, saying it wasn't enough of a payment from the NFL. (Via PBS)

This new University of Tulsa study was published Wednesday in The Journal of the American Medical Association.