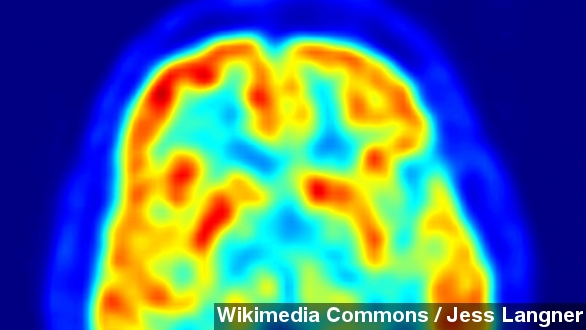 By Erik Shute
April 17, 2014
The brains of artists aren't really left-brain or right-brain, but rather have extra neural matter in visual and motor control areas.
SHOW TRANSCRIPT

​For years we’ve asked the question, “Are you more right-brained or left-brained?” Turns out we’re neither — new research shows we should be looking at the size of our neural matter instead.

That’s according to research published in NeuroImage. Scientists studied the brain scans of artists and found an increase in brain neural matter — specifically in fine motor and visual imagery areas, accounted for their creativity. And of course, those two areas are not on the same side of the brain.

​Lead author Rebecca Chamberlain told BBC News, "The people who are better at drawing really seem to have more developed structures in regions of the brain that control for fine motor performance and what we call procedural memory." (Via BBC)

The study can’t confirm whether this extra matter is an innate gift, though it does suggest the artist’s environment or upbringing plays a part in developing these creative spaces.

But for those of us who are pencil pushers instead of painters, the study also provides evidence that all brains are “incredibly flexible” when trained, meaning you might have extra matter in places where you do the most thinking.

The small study surveyed 21 art students and compared them to 23 non-artists, taking brain scans as they rested and while they were asked to draw, according to Medical Daily.  The art students had significant amounts of extra matter aiding their visual skills, while the non-artists only had “hints.”

So far it’s a good start, but Dangerous Minds notes the researchers hope to strengthen their findings with a larger sample size and study how maturing teens develop extra brain matter.