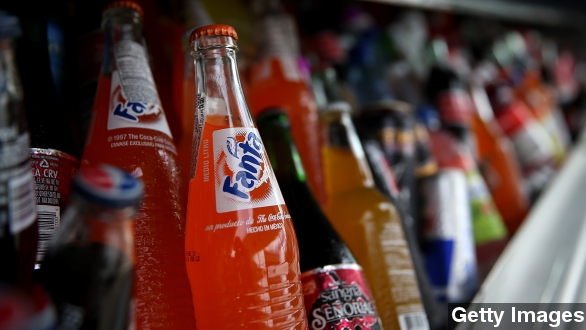 By Madison Burke
October 19, 2014
Researchers at the University of California San Francisco found the sugar in soda might accelerate the body's aging process.
SHOW TRANSCRIPT

We already know drinking soda can lead to obesity, but new research suggests drinking a can of the carbonated beverage everyday can be as bad as smoking. Yikes.

Researchers at the University of California San Francisco found those who drank 20-ounces of soda had DNA typical of someone 4.6 years older.

To come to this conclusion, researchers looked at how soda intake effected the DNA of more than 5,000 people nationwide.

But it's important to point out researchers did not find diet soda to have the same effect, making the extraordinary amount of sugar in each can of regular soda the likely culprit.

Senior study author Elissa Epel said, “Regular consumption of sugar-sweetened sodas might influence disease development, not only by straining the body’s metabolic control of sugars but also through accelerated cellular aging of tissues.”

However, even though diet soda might not age you quite as much, it's probably not a good idea to make a habit of drinking either.

Previous studies have shown the artificial sweeteners in diet soda may even cause cancer.

And both regular and diet soda can be bad for your teeth.

But some good news — soda consumption has actually been going down in the U.S. for years now.