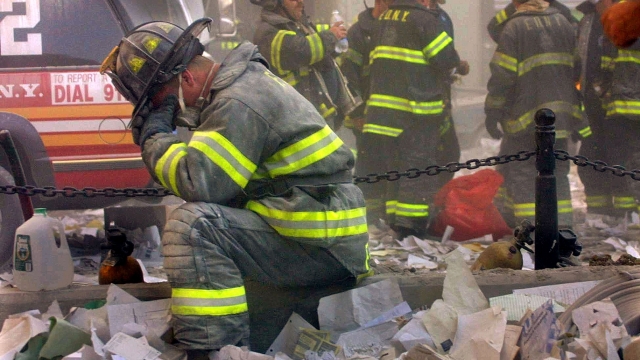 Firefighters who responded to the 9/11 terrorist attacks appear to face a higher risk of cardiovascular disease.

A new study published Friday in the Journal of the American Medical Association found firefighters who spent any amount of time working in the aftermath of the attacks and around the dust from the World Trade Center are at an elevated risk of developing heart disease.

Firefighters who arrived at the World Trade Center the morning of the attack had a 44% higher risk of developing cardiovascular disease than those who arrived later.

According to the study, the largest concentration of dust was found "immediately after the collapse of the WTC towers." It says, "With more than a million tons of WTC dust, even 1% would constitute an enormous amount" of dangerous fine particles in the air.

And firefighters who worked at the World Trade Center for six months or more were more likely to develop heart disease than those who spent less time at the site.

But the study points out the James Zadroga 9/11 Health and Compensation Act of 2010 doesn't pay for medical care for these conditions.

The New York City Fire Department says over 200 of its firefighters have died of illnesses related to the rescue and recovery efforts from 9/11.

The study's authors say their findings show "the continued need for long-term monitoring of the health of survivors of disasters."