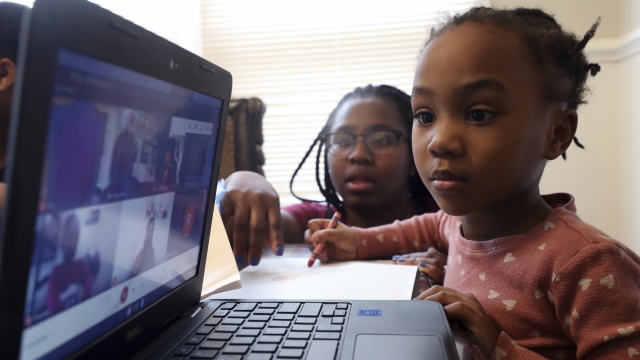 SMS
Study: Less Bullying, Cyberbullying During Remote Learning
By Cat Sandoval
By Cat Sandoval
March 3, 2022
When schools transitioned to remote learning in spring of 2020, Andrew Bacher-Hicks and his team found that Google searches on bullying decreased.

Ten-year-old Ja'Vae Williams-Hunt was picked on in first and second grade, making her among the one in five students nationwide who reported being bullied pre-pandemic.

"So in first grade, the little girl — when I was in line, once she started kicking the back of my shoe and then pushing me, I asked her to stop and she didn't. And then she did it again. And then she just started calling me names," Williams-Hunt said.

A new study from Boston University, though, finds that during the pandemic, in-person bullying and cyberbullying decreased as more schools embraced remote learning. And what we've learned may be useful in the future.

When schools transitioned to remote learning in spring of 2020, Boston University Assistant Professor of Education Andrew Bacher-Hicks and his team found that Google searches on bullying and cyberbullying dropped by 30-40%. Here's why that matters: Past research has shown a link between online searches and actual bullying cases reported by schools.

"Some of the strategies that schools were using to mitigate the spread of COVID may have also prevented bullying from happening in schools," Bacher-Hicks said. "Historically, there have been higher levels of internet search[es] for bullying, [which] are strongly predictive of higher levels of survey responses, indicating that students were bullied more online and in school."

When students began returning in the 2020-2021 school year, researchers used CDC data to determine that areas where schools were fully remote had a 42% drop in bully-related searches. Meanwhile, regions where kids were allowed back on campus also saw a drop — but less so at about 19%.

"I think one potential area to explore might be thinking critically about some of the structures that were put in place during the concern of the spread of COVID to potentially reduce bullying as well," Bacher-Hicks continued.

He suspects one reason bullying went down, even when schools returned in person, was because there were more adults around as they policed virus-related precautions like distancing and mask wearing.

"So as school starts returning to normal, in-person instruction, I think it reasonable to be concerned that levels of bullying might go back to pre-pandemic levels," Bacher-Hicks said.

For 12-year-old Phoenix Hurst, who has alopecia, bullies have started fights — including pulling off her wig in school. That abuse was doubled up with posts online.

"It made me feel upset that I was getting bullied for something that I have," she said. "And the fact that other women wear wigs and nobody said anything about it."

Bullying and cyberbullying are equally harmful. Counselor Alise Bartley invites parents to ask: "What kinds of things am I doing with my kids to connect with them? To show them that they matter?"

The pandemic interrupted education, but perhaps one silver lining is that it we may have learned more about bullying and how to reduce it.