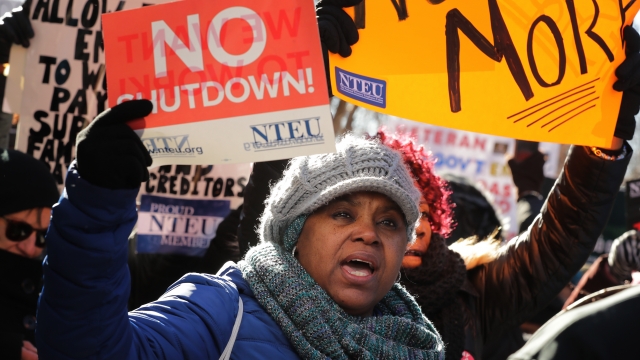 SMS
Study: Government Owes Furloughed Workers $6 Billion In Back Pay
By Ahmed Jawadi
By Ahmed Jawadi
January 23, 2019
​The study estimates the average federal worker has lost over $5,000 in wages since the shutdown began.
SHOW TRANSCRIPT

As the partial government shutdown enters its second month, a new study estimates the back pay owed to the roughly 800,000 furloughed federal workers will hit $6 billion by the end of this week.

Using data from an annual household survey by the U.S. Census Bureau, the study estimates the average federal worker has lost more than $5,000 in wages since the shutdown began. By the end of this week, that could be closer to $7,000.

For comparison, federal employees furloughed for 16 days during the 2013 shutdown were owed approximately $2 billion, according to a government study.

The partial government shutdown's impact can be felt across federal agencies. Earlier this week, the TSA said its employee absence rate Sunday was over three times the rate of the same day last year. And a new report from the FBI Agents Association said the lack of funding has hindered several investigations.