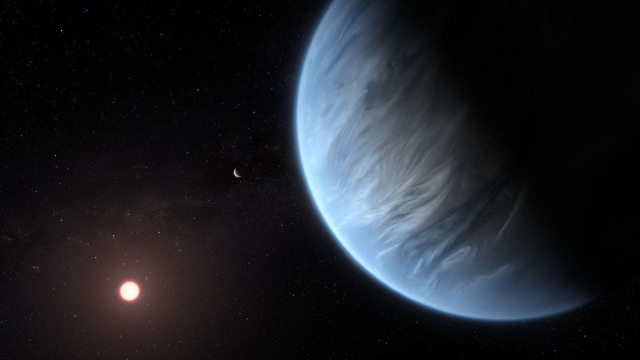 SMS
Study Finds Water In Atmosphere Of Potentially Habitable Planet
By Ethan Weston
By Ethan Weston
September 11, 2019
It's the first time scientists have found water in the atmosphere of a planet that also orbits in its star's habitable zone.
SHOW TRANSCRIPT

Scientists studying data from the Hubble Space Telescope have discovered water vapor in the atmosphere of a far-off exoplanet.

The planet, with the catchy name K2-18b, is the first one scientists have found that has water vapor in its atmosphere and also exists in its star's habitable zone, according to the journal Nature Astronomy.

That makes the exoplanet a perfect candidate to search for alien life — eventually.

If you're hoping for news on little green men anytime soon, we've got some bad news for you: The planet is 111 light-years away. Even if we could send a probe now, it wouldn't arrive for a very long time.

But with every water vapor cloud comes a silver lining. The study's lead scientist told the BBC that within the next 10 years, there will be ways to detect chemicals in the planet's atmosphere that indicate whether anything lives there. But the outlet notes scientists don't all agree on what those chemicals actually are just yet.