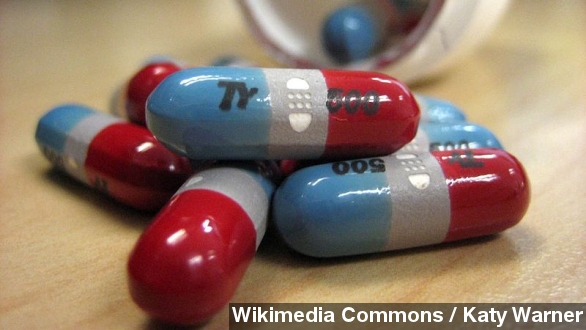 SMS
Study Finds Possible Link Between Tylenol And ADHD
February 24, 2014
The study found a link between women taking acetaminophen while pregnant and their children later being diagnosed with the disorder.
SHOW TRANSCRIPT

Pregnant women might want to think twice before reaching for the Tylenol to help their aches and pains.

A new study published by the American Medical Association found a link between pregnant mothers taking acetaminophen, the active ingredient in pain relievers like Tylenol, and a higher risk of having children diagnosed with ADHD. (Via Wikimedia Commons / Ragesoss, Wikimedia Commons / Deborah Austin, Flickr / Gary Seidman)

The analysis covered more than 64,000 children and mothers. In an editorial accompanying the study, doctors wrote that, while important, the findings from the study should be interpreted cautiously. (Via The Jama Network)

By "cautiously," they mean expectant mothers shouldn't necessarily avoid taking a Tylenol here and there.

"One of the flaws in the study is that its not really experimental. What they did was that they called the mothers and asked if they used Tylenol when they were pregnant, or acetaminophen​, and then they also checked to see if these children were later using Ritalin."

So the study may have found a correlation, but it's far from proof that Tylenol causes ADHD. A Tylenol spokesperson responded in a similar way, telling CNN:

"When used as directed, Tylenol has one of the most favorable safety profiles among over-the-counter pain relievers. ... There are no prospective, randomized controlled studies demonstrating a causal link between acetaminophen use during pregnancy and adverse effects on child development."

But doctors agree the issue needs to be investigated. CNN's Sanjay Gupta explains the state of the medical back-and-forth at the moment.

"The right answer is, we don't know. And people who say they know for sure probably don't. But what they think could be happening is that Tylenol could be acting as what is known as an endocrine disrupter."

This is the latest unfortunate headline for Tylenol. Over the past few months, the FDA has issued warnings over high doses of the medicine and the possibility of liver damage. They've even gone as far as suggesting the use of warning labels on drugs that contain the acetaminophen.

Just more than 11 percent of children in the U.S. have been diagnosed with ADHD, and around half the nation's mothers take acetaminophen during pregnancy.