New Evidence Shows People Have Been Smoking Cannabis For Millennia 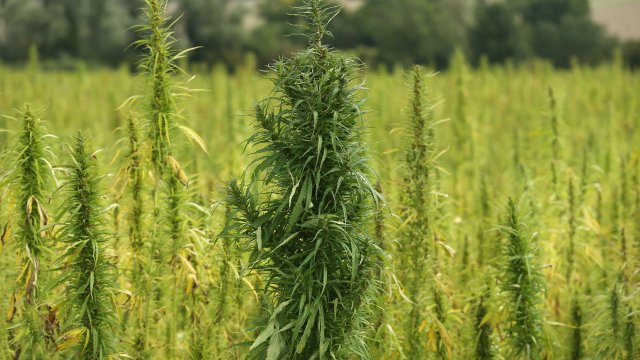 SMS
New Evidence Shows People Have Been Smoking Cannabis For Millennia
By Cristina Mutchler
By Cristina Mutchler
June 12, 2019
A new study in the journal Science Advances points to evidence on the origins of cannabis smoking in the first millennium B.C.
SHOW TRANSCRIPT

It's a drug that's been making legalization headlines lately, but it's definitely not new.

Cannabis is one of the oldest plants in East Asia, present in that area for millennia. It's long been cultivated for grain, fiber, recreational, medicinal and ritual purposes.

But when did humans first recognize the plant's psychoactive properties and start using *for those properties?

A new study published Wednesday in the journal Science Advances is shedding more light on that issue, providing what researchers call some of the earliest evidence for ritual cannabis smoking.

They looked at psychoactive compounds preserved in 2,500 year-old incense burners that were excavated from eight tombs in western China.

Chemical analysis found cannabis plants were burned in those wooden containers, suggesting the drug was smoked as part of ritualistic or religious practices. What's more, the cannabis traces appeared to come from plants that produced high levels of THC, the drug's most potent psychoactive component.

That indicates, according to researchers, that people at the time were aware of and interacting with specific populations of the plant to produce an intended result.

Dr. Robert Spengler, laboratory director at the Max Planck Institute for the Science of Human History, was one of the authors of the study.

"I think it's important to recognize that humans have been seeking out plants that have secondary metabolites that have effects on the human body. So psychoactive plants, they've been seeking these out for thousands of years, if not much longer. So the idea that there is drug use in the ancient world or plants were being targeted for their secondary compounds is also not necessarily surprising," Spengler said.

The findings lead experts to speculate that the cannabis smoking was likely performed during burial ceremonies, perhaps as a way to commemorate or communicate with the divine or the dead.

"It seems, based on the material culture, that it has a ritual significance or is somehow tied into the mortuary practices at the site. And that would fit well with what we know from other first millennia B.C. finds of cannabis, which also come from burials," Spengler said.

Thousands of years later, cannabis use is a topic that's still relevant today.

Another one of the study's authors, Professor Nicole Boivin, director of the Max Planck Institute for the Science of Human History, points out that the results may be able to provide some present-day context. She says the study "can help us to understand the origins of contemporary cultural practice and belief structures — which, in turn, can inform policy."

And while perspectives on the topic can vary cross-culturally, there's still a common, historical thread.

"I do think it's important to acknowledge the long interactive relationship that humans and this plant species have had." Spengler said: "This is not a new phenomenon in the recent past. And that humans throughout time have sought after plants that do have psychoactive properties."