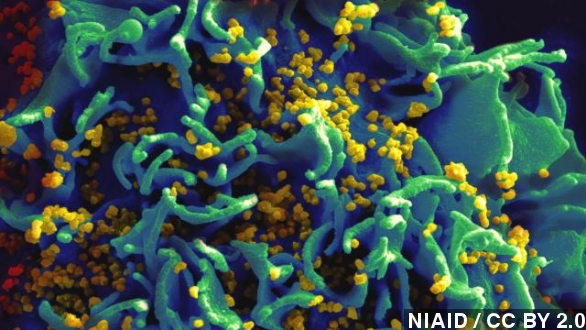 SMS
Study Finds HIV Becoming 'Watered Down' Over Time
By Jake Godin
By Jake Godin
December 2, 2014
A new study led by the University of Oxford has found that HIV is taking longer to progress to AIDS as it becomes "watered down."
SHOW TRANSCRIPT

Diseases are known for their ability to mutate, becoming worse as they adapt to people's immune systems. But it turns out that works both ways. A new study shows HIV could be evolving into a milder form.

A study done by the University of Oxford and published in the journal Proceedings of the National Academy of Science found that HIV is taking longer to progress to AIDS. The study cited two possible factors: our immune systems and access to antiretroviral drugs. (Video via Wellcome Trust)

The study found that those with stronger immune systems essentially water down the HIV virus by forcing it to weaken itself in order to survive. As it's passed on, it becomes weaker and less able to replicate. (Video via Howard Hughes Medical Institute)

Researchers examined 2,000 HIV patients from Botswana and South Africa. Patients in Botswana, which has had the virus longer than its southern neighbor, were taking longer to progress from HIV to AIDS. (Video via World Bank)

Using a mathematical model, the second part of the study found that using antiretroviral drugs against the most virulent HIV cases has a similar effect and also weakens the virus's ability to replicate.

Both of these are good signs to one virologist from the University of Nottingham, who told the BBC, "In theory, if we were to let HIV run its course then we would see a human population emerge that was more resistant to the virus than we collectively are today — HIV infection would eventually become almost harmless."

That said, a professor at Cardiff University cautioned to the BBC HIV was still a long way from becoming harmless and the development of a cure is vital.

And in November, a report by the Joint United Nations Programme on HIV/AIDS warned if further progress isn't made against AIDS in the next five years, it might rebound.

According to the United Nations, 19 million of the 35 million people living with HIV do not know they have the virus.