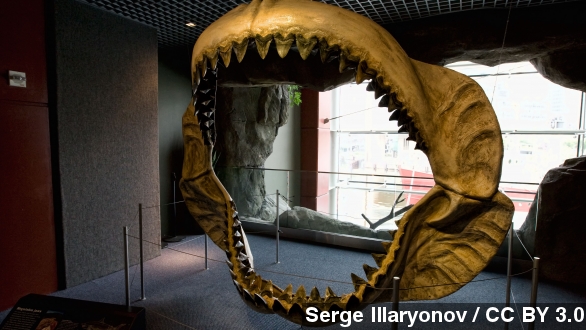 By Sebastian Martinez
October 27, 2014
How and why a study about when the giant prehistoric shark Megalodon went extinct got picked up as "proof" that it is.
SHOW TRANSCRIPT

There's a new study out trying to pinpoint exactly when the world's biggest shark, Megalodon, went extinct, and some outlets are kind of missing the point.

The problem is, that's not true. The study used an extinction model to determine Megalodon's disappearance as a species to 2.6 million years ago.

That region of 2 million years ago had been the general agreement among scientists. So why would people think there's no consensus? Basically, the Discovery Channel.

DISCOVERY CHANNEL: "Sightings around the world lend support to the idea of Megalodon hunting in our oceans today."

That's from a 2013 fictional TV special Discovery used to kick off its Shark Week marathon that year.

Leading to the confusion — the special was sold as fact in what many saw as a ratings grab, and that led to condemnation from the scientific community.

JOSEPH STROMBERG, VOX: "The scientist was an actor, the footage was faked and the deaths didn't even happen. Viewers had no way of knowing this; there was just a disclaimer saying the scenes were dramatized. ... An online poll afterwards showed that 73 percent of viewers thought it was real."

So in the wake of that, it's no surprise that outlets like the Daily Mail greet this new study with headlines like, "The Megalodon IS extinct," as though that were some kind of revelation.

For its part, Discovery reported the study by saying, "Controversy has surrounded the timetable of existence for Megalodon," despite the fact that it hasn't — and the only dissenting voice has been Discovery's.

So what's really the takeaway from the study? Well, it has less to do with when Megalodon went extinct and more with what happened when it did.

The study says Megalodon's extinction 2.6 million years ago was followed by baleen whales reaching their gigantic modern sizes. The Megalodon — their predator — was gone. (Video via National Geographic)

Apex predators — animals who have no natural predators — play a crucial part in any ecosystem, and their removal can substantially affect the balance, as this video you should check out explains, focusing on how wolves in Yellowstone changed the park's rivers.

SUSTAINABLE HUMAN: "By driving the deer out of some places, and the vegetation recovering on the valley sides, there was less soil erosion because the vegetation stabilized that as well."

In the case of Megalodon, it's possible the removal of such a powerful predator allowed the whales more time and a wider range to feed, leading to the increase in size.

So despite the fact that Megalodon is definitely, well and truly extinct, its impact can still be seen and heard in our oceans today.

This video includes an image from Gunnar Ries / CC BY NC ND 2.0 and music from Chris Zabriskie / CC BY 4.0.