Students Register Voters At March For Our Lives 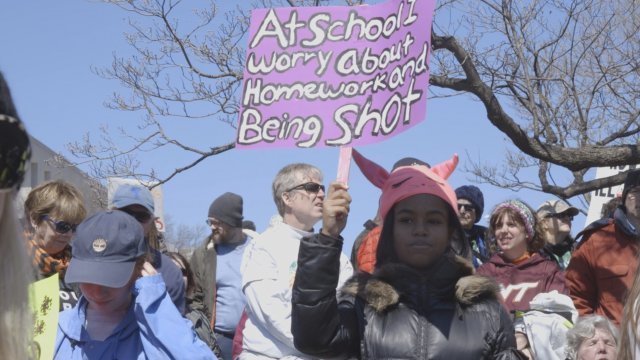 The March for Our Lives may be over, but students are pushing ahead — pushing to another walkout April 20, but also pushing to the polls. Many of the people at the march were high school students, and some will be able to cast ballots in November. Historically, that doesn't mean much. These new activists say they're about to change that.

"First-time voters show up 18 percent of the time in midterm elections," said organizer David Hogg. "Not anymore. And to those politicians supported by the NRA that allow the continued slaughter of our children and our future, I say get your resumes ready."

Pew Research says 24 million young people voted in the 2016 election. That's about 49.4 percent of eligible voters, up from 46.4 percent in 2012. Students at the rally in Washington say their votes are what will pressure politicians to get on board with their ideas for gun control.

Malcolm and Niles Boothe won't be old enough to vote in November. But they spent the day registering other people to vote.

"We got to let them know we're here. Knock on their door. Step up," Boothe said. "In Florida they may be able to hear us, but if they see us here, all together here, then we'll change them."

Both boys said they didn't want to register people just in their home states of New York and Florida. They knew people from all over would be here in Washington.

Malcolm said he thought it would have a bigger impact.

One thousand volunteers flooded the D.C. streets Saturday in neon t-shirts, and more hit the pavement around the country. The organizers, HeadCount, told NBC News that as of Sunday, they'd registered nearly 5,000 people across the country.