Why Students In Bangladesh Are Enforcing Traffic Safety Rules 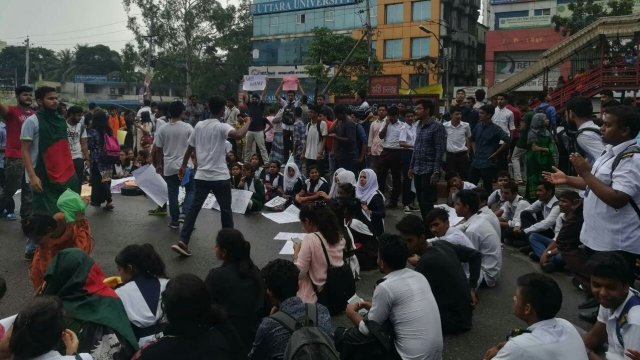 SMS
Why Students In Bangladesh Are Enforcing Traffic Safety Rules
By Melissa Prax
By Melissa Prax
August 7, 2018
From checking driver's licenses to staging protests, the movement has stopped traffic in parts of the country's capital.
SHOW TRANSCRIPT

Students in Bangladesh want safer roads, and they're heading into their second week of protests demanding just that. The movement was sparked by the deaths of two students who were run over by a bus. Those protests started out peaceful but turned violent as police and a pro-government group tried to gain control.

We spoke to two students who joined the protests early on. Now, dozens of protesters have been hurt by tear gas and rubber bullets over the past few days. Journalists have also been targeted. The students we talked to asked that we protect their identities. 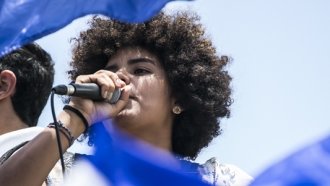 Protests In Nicaragua Prove Young People There Are Politically Engaged

"This is somewhat unprecedented, simply because most protests in the country have had a political backing and have other political ideology behind it. … These are students who are simply demanding justice, because their peers were killed ... However, we think that the movement itself is slowly becoming susceptible to political capture, because parties are trying to politicize that movement and use it in their favor," another student said.

The bus crash that started the protests wasn't unusual. Bangladesh's traffic has been a concern of international organizations, like the World Bank, for years. National statistics show road accidents rose sharply from the first half of 2016 to the same time in 2017.

Stark images coming out of the country show young people taking traffic law enforcement into their own hands.

"The students moved on the streets on their own and started acting like traffic police officers. And started controlling the vehicles, lining them up in a line, making the roads safer so that no accidents occur. And they started checking the license of the drivers. If they found a driver without a license and without the correct papers for the cars, the vehicles that they're driving, they basically take them to the police officers and give them a case," a student said.

The government has said it would tighten road safety measures, but protesters are concerned those statements won't turn into sustainable action. In order to gain control, the government temporarily slowed internet speeds. That's important, since a lot of the organizing is done online. And one of the students shared with us a text message from his school administration asking students to stay in class.

The U.S. Embassy in Dhaka said it condemns vandalism but "nothing can justify the brutal attacks and violence over the weekend against the thousands of young people."